Torquay is a seaside town in Devon, England, part of the unitary authority area of Torbay. It lies 18 miles south of the county town of Exeter and 28 miles east-north-east of Plymouth, on the north of Tor Bay, adjoining the neighbouring town of Paignton on the west of the bay and across from the fishing port of Brixham. The town's economy, like Brixham's, was initially based upon fishing and agriculture, but in the early 19th century the town began to develop into a fashionable seaside resort, initially frequented by members of the Royal Navy during the Napoleonic Wars while the Royal Navy anchored in the bay. Later, as the town's fame spread, it was popular with the crème de la crème of Victorian society. Renowned for its healthful climate, the town earned the nickname of the English Riviera and favourable comparisons to Montpellier. Torquay was the home of the writer Agatha Christie, who was born in the town and lived there during her early years. During World War II Torquay was regarded as safer than the towns of South East England, and played host to evacuees from the London area, the town did however suffer minor bomb damage during the war, mainly from planes dumping excess loads after participating in the Plymouth Blitz. The last air raid on Torquay took place on 29 May 1944 shortly before the D-Day landings in June and, in the months leading up to D-Day, thousands of US Army personnel arrived with the 3204th Quartermaster Service Company billeted in Chelston and Cockington. During Operation Overlord more than 23,000 men of the American 4th Infantry Division departed Torquay for Utah Beach. Torquay has two railway stations. Torquay railway station is situated near the sea, close to Torre Abbey Sands. Torre railway station is situated a little inland adjacent to the road leading to Newton Abbot. Not all trains stop at Torre.

The original Torquay United was formed in 1899 by a group of school-leavers under the guidance of Sergeant-Major Edward Tomney. The newly founded club played its inaugural match against an Upton Cricket Club XI on one of Farmer John Wright's fields, which was situated at the top of Penny's Hill, on Teignmouth Road. After a season of friendlies the club joined the East Devon League and moved into the Recreation Ground, their home for the next four years, Plainmoor being occupied by Torquay Athletic Rugby Club at this time in a reversal of the current situation. In 1904 Athletic secured the lease on the Recreation Ground from underneath United and Torquay and District League rivals Ellacombe took over the lease of Plainmoor leaving United homeless for the first time in their existence and facilitating a return to the farmers fields on Teignmouth Road, however the club was on the move again when the fields were sold to be developed into what would later be known as Parkhurst Road. United soon found another home, sharing with Torquay Cricket Club in nearby Cricketfield Road (a site still used for football in the modern day by South Devon League side Upton Athletic) for four years and during that time won their first honour, the Torquay and District League title in 1909. Following this breakthrough, the club merged with local rivals Ellacombe in 1910, adopted the name Torquay Town and finally moved into Plainmoor where they would remain to the modern day. During this period the ground was shared with the team's remaining local rival Babbacombe. Both sides were playing in the same league, the Plymouth and District League alongside the reserve teams of Exeter City and Plymouth Argyle; Torquay Town would later win the league in the 1911–12 season. Relations between the two Torquay clubs were poor, but in 1921 matters finally came to a head. Torquay Town was desperate to join its local rivals in the league and after many discussions Babbacombe at last agreed to a merger, enabling the new club to become the sole representative of the town and turn professional to further its case for league election, the new team was to be called Torquay United again, reverting to the town's name of circa 1910. In 1927, Torquay finally won their first league title since the Torquay and District League of 1912, winning the western division of the Southern League, United had the same number of points as Bristol City Reserves, but their 3–1 win on the final day of the season helped them to win the league on goal difference. The club then went on to lose the Southern League Championship final against the Eastern Champions Brighton and Hove Albion Reserves 4–0 but it was the start of an upturn in the club's fortunes. Capitalising on this momentum, the club once again applied for league membership and were successful this time, joining the Football League Third Division at the expense of Aberdare Athletic, who dropped out after failing to be re-elected to the league. Finally the town of Torquay had a professional league team and had joined Plymouth and Exeter in the football league at last.

This Pieman was able to visit Plainmoor for this Football League Division Four encounter with Cambridge United. A solitary goal for the home side was enough to clinch all three points. The journey by train from London Paddington involved changing services at Newton Abbot. At the time there was a restriction on away fans visiting Plainmoor but an early visit to the club offices with Spurs Supporters Club cards did the trick in securing match tickets. 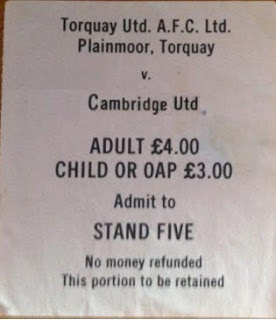 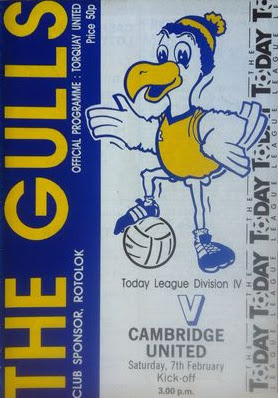