Stockport is a large town in Greater Manchester. It lies on elevated ground 7 miles south-east of Manchester city centre, at the point where the rivers Goyt and Tame merge to create the River Mersey. Stockport is the largest settlement in the metropolitan borough of the same name. Historically, most of the town was in Cheshire, but the area to the north of the Mersey was in Lancashire. Stockport in the 16th century was a small town entirely on the south bank of the Mersey, and known for the cultivation of hemp and rope manufacture. No part of Stockport appears in the Doomsday Book of 1086. The area north of the Mersey was part of the hundred of Salford, which was poorly surveyed. Dominating the western approaches to the town is the Stockport Viaduct. Built in 1840, the viaduct's 27 brick arches carry the mainline railways from Manchester to Birmingham and London over the River Mersey. This structure featured as the background in many paintings by L. S. Lowry. Hat making was established in north Cheshire and south-east Lancashire by the 16th century. In the early 19th century the number of hatters in the area began to increase, and a reputation for quality work was created. The London firm of Miller Christy bought out a local firm in 1826. By the latter part of the century hatting had changed from a manual to a mechanised process, and was one of Stockport's primary employers; the area, with nearby Denton, was the leading national centre. Support industries, such as block making, trimmings, and leatherwear, became established. The First World War cut off overseas markets, which established local industries and eroded Stockport's eminence. Even so, in 1932 more than 3000 people worked in the industry, making it the third biggest employer after textiles and engineering. The depression of the 1930s and changes in fashion greatly reduced the demand for hats, and the demand that existed was met by cheaper wool products made elsewhere, for example the Luton area. In 1966, the largest of the regions remaining felt hat manufacturers, Battersby & Co, T & W Lees, J. Moores & Sons, and Joseph Wilson & Sons, merged with Christy & Co to form Associated British Hat Manufacturers, leaving Christy's and Wilson's (at Denton) as the last two factories in production. The Wilson's factory closed in 1980, leaving only the Christy's factory.


Stockport County FC was formed in 1883 as Heaton Norris Rovers by members of the Wycliffe Congregational Church and played their first recorded game in October the next year. The club adopted 'The Hatters' as their nickname, owing to Stockport's history as the centre of the Victorian hat-making industry, a nickname that is shared with Luton Town. Heaton Norris Rovers originally played home matches at the Heaton Norris Recreation Ground, then at various locations in Stockport until settling at a park on Green Lane, Heaton Norris, in 1889. The nearby Nursery Inn served as the team's home, with players using a barn as changing rooms. The club played in the Lancashire League until 1900. They then gained admission to the Football League Second Division. Stockport's first Football league match was against Leicester Fosse, which ended in a 2-2 draw. In 1902 the club required a larger ground and moved to Edgeley Park, then home of the rugby league club Stockport, who went out of business three years later. The 1950s brought little league success, but were notable for some fine goal scoring by Jack Connor, whose 140 goals in 5 seasons is still a club record, including 13 hat-tricks. When the regional Third Divisions were to be combined into national Third and Fourth Divisions after the 1957–58 campaign, Stockport managed to finish in the top half of the Third Division North and so was placed in the following season's national Third Division. But they only spent one season at this level as Stockport before being demoted. Stockport played in the first ever League Cup competition in 1960–61 beating Carlisle United in the first round. Stockport was eliminated in the second round after a 3-0 defeat against Manchester City. Stockport Survived re-election in the 1964–65 season. After finishing bottom of the league with only 27 points, Stockport was re-elected by gaining 45 votes. During the 1964/65 season then Stockport Chairman Vic Bernard re-introduced the royal blue strip; colours they still play in to this date. Two seasons later Stockport returned to Third Division by winning the Fourth Division, in 1966–67, after gaining 64 points. After being relegated in 1969–70, the following seasons consisted of little other than mediocrity or struggling against re-election.


This Pieman visited Edgeley Park on a Friday evening, staying over in Manchester before watching a match at Crewe the following day. It has to be said that the 0-0 draw with Torquay United was not the most entertaining of matches and will not live too long in the memory! 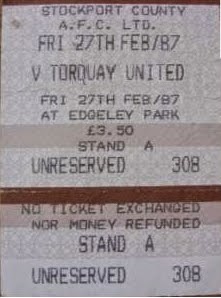 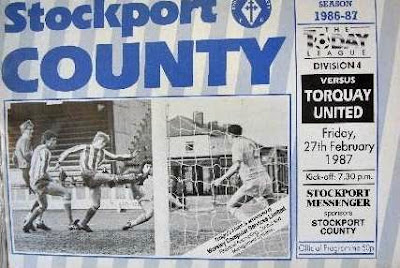