Forest Gate is a residential area in the London Borough of Newham, 7 miles northeast of Charing Cross. It is bordered by Manor Park to the east and to the west lies Stratford town centre. Its name is derived from a southern gate of Epping Forest, which once stretched continuously down from Epping to the main Roman Road (now Romford Road) linking Camulodunum to Londinium. The Forest Gate led into Epping Forest and was erected to prevent cattle straying from the Forest into the High Road. It was located close to the former Eagle & Child public house. It never was a tollgate and was demolished along with the keepers' cottage in 1881. An Anglo-Saxon jewelled bead was found in Forest Gate in 1875. The 'bead' is made of gold, garnet and blue glass dating to the late sixth or early seventh century with the workmanship suggesting that it belonged to a woman of wealth or high status such as a 'princess' and dates from the 6th - 7th centuries (500 - 699 AD). Having been found as a single object, it is surmised that the bead was lost casually whilst travelling along the ancient Roman Road rather than as a burial object, but this is by no means certain as there is a lack of detail about how it was recovered. Stylistically, the piece is said to relate to similar jewellery produced in Kent, which influenced designs in Essex. It is known that King Sledd of Essex married Ricula, the sister of King Ethelberht of Kent in about 580 AD. The piece was acquired by Sir John Evans and was presented to the Ashmolean Museum in Oxford by Sir Arthur Evans in 1909. The area remained rural until the 19th century. From the 18th century a number of wealthy city dwellers had large country houses in the area and many of them were Quakers, the best known of these were the families of Gurney, Fry and Lester. Forest Gate formed part of the County Borough of West Ham since its creation (initially as a municipal borough) in 1886. The county borough was abolished to form part of the present-day London Borough of Newham in 1965.


Established in 1878 as Downs Football Club and initially based at Hackney Downs, Lower Clapton, the Hackney club originally played in dark blue shirts and white shorts with a distinctive white Maltese cross on the left breast. The following year the club adopted its current name. In 1880 the club moved to a pitch adjacent to nearby Lea Bridge Road in Leyton, but moved on again shortly afterwards to a ground at Elm Farm. In 1888 The Tons moved to The Old Spotted Dog Ground in Forest Gate after St Bartholomew’s Hospital vacated it. The first game at their new home drew a crowd of over 4,000 and saw the club beat Old Carthusians 1–0. Clapton began competing in the FA Cup in 1888–89, and in 1890 became the first club from Great Britain to play in continental Europe, defeating a Belgian XI. In 1894 the club became founder members of the Southern League and were placed in Division One. In 1904–05 the club reached the final of the FA Amateur Cup, but lost 3–2 to West Hartlepool. In 1905 the club were founder members of the Isthmian League, finishing as runners-up in its first season. The following season they won the Amateur Cup and in 1908–09 they won it again. In 1910–11 they won the Isthmian League title for the first time, and in 1914–15 won the Amateur Cup for a third time. In 1922–23 the club won the Isthmian League again, and in 1923–24 they won their fourth Amateur Cup, retaining it the following season, and in 1925–26 they qualified for the first round of the FA Cup. After beating Norwich City and Ilford in the first and second rounds, they lost 3–2 at home to Swindon Town in the third round, a match that was played at West Ham's Boleyn Ground. The club reached the first round of the FA Cup again in 1926–27, 1927–28 and 1957–58. In 1975–76 the club finished bottom of Division One of the Isthmian League, and were relegated to Division Two, which was renamed Division One in 1977. In 1981–82 they were relegated to Division Two, but returned after a single season as Division Two champions. The club won the Essex Senior Cup for a third time in 1984, but were relegated again at the end of the 1984–85 season and placed in Division Two North.


This Pieman travelled to the Old Spotted Dog ground one evening after work. The journey from London Liverpool Street to Forest Gate taking around ten minutes with the walk to the ground taking the same time. A close match with Harlow Town ended 1-1. 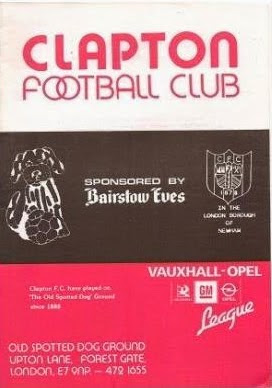