Blackpool is a seaside town and borough of Lancashire, North West England. It is situated along England's northwest coast by the Irish Sea, between the Ribble and Wyre estuaries, 17.5 miles northwest of Preston, 27 miles north of Liverpool, 30 miles northwest of Bolton and 40 miles (64 km) northwest of Manchester. Throughout the middle Ages and Early Modern period, Blackpool was a coastal hamlet in Lancashire's Hundred of Amounderness, and remained such until the mid-18th century when it became fashionable in England to travel to the coast during the summer to bathe in sea water to improve well-being. In 1781, visitors attracted to Blackpool's 7-mile sandy beach were able to use a newly built private road, built by Thomas Clifton and Sir Henry Hoghton. Stagecoaches began running to Blackpool from Manchester in the same year and from Halifax in 1782. In the early 19th century, Henry Banks and his son-in-law John Cocker erected new buildings in Blackpool such that its population grew from less than 500 in 1801 to over 2,500 in 1851. St John's Church in Blackpool was consecrated in 1821. 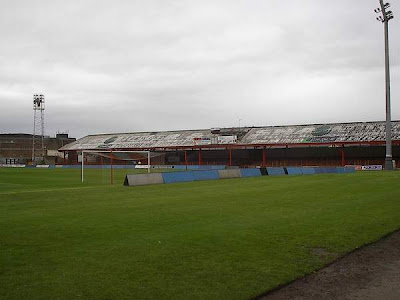 Blackpool rose to prominence as a major centre of tourism in England when a railway was built in the 1840s connecting it to the industrialised regions of Northern England. The railway made it much easier and cheaper for visitors to reach Blackpool, triggering an influx of settlers, such that in 1876 Blackpool was incorporated as a borough, governed by its own town council and aldermen. In 1881 Blackpool was a booming resort with a population of 14,000 and a promenade complete with piers, fortune-tellers, public houses, trams, donkey rides, fish-and-chip shops and theatres. By 1901 the population of Blackpool was 47,000, by which time its place was cemented as "the archetypal British seaside resort". By 1951 it had grown to 147,000.
Shifts in tastes, combined with opportunities for Britons to travel overseas, supplanted Blackpool's status as a leading resort during the late 20th century. Nevertheless, Blackpool's urban fabric and economy remains relatively undiversified, and firmly rooted in the tourism sector, and the borough's seafront continues to attract millions of visitors every year. In addition to its sandy beaches, Blackpool's major attractions and landmarks include Blackpool Tower, Blackpool Illuminations, the Pleasure Beach and the UK's only surviving first-generation tramway. 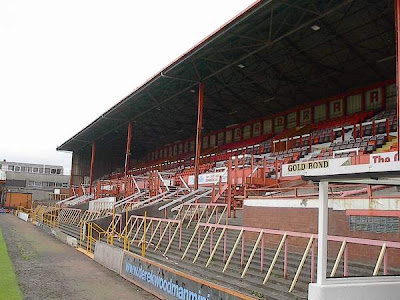 Football had developed in Blackpool by 1877 when Victoria F.C. was founded as a church club with a ground in Caunce Street. This team disbanded a few years later but some of its members are understood to have merged with old boys from St John's School to form a new club called Blackpool St John's. But the two factions remained disunited and, on 26 July 1887, at a meeting in the Stanley Arms public house, the members resolved to wind up St John's and form a new club to represent the whole town called Blackpool Football Club. Blackpool's home ground has been Bloomfield Road since 1901. Their main nickname is the Seasiders, though they are also called the 'Pool and the Tangerines, the latter in reference to the colour of their home kit, which is often referred to as orange. 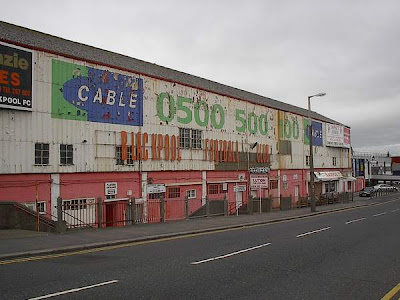 This Pieman travelled to Blackpool by train, changing at Preston on the way. Visitors Middlesbrough took the points in this League Division Three clash with the only goal of the match. 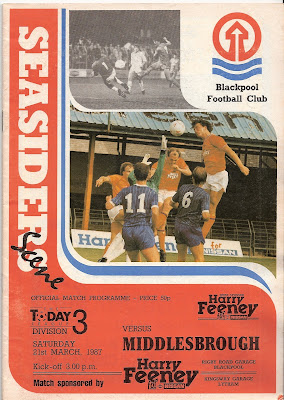 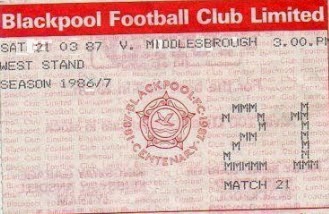