Bermondsey is a district in south London, and a part of the London Borough of Southwark. To the west of Bermondsey lies Southwark, to the east Rotherhithe, and to the south, Walworth and Peckham. To the north is the River Thames. Bermondsey may be understood to mean 'Beornmund's island'; but, while "Beornmund" represents an Old English personal name, identifying an individual once associated with the place, the element "-ey" represents Old English "eg", for "island", "piece of firm land in a fen", or simply a "place by a stream or river". Thus Bermondsey need not have been an island as such in the Anglo-Saxon period, and is as likely to have been a higher, drier spot in an otherwise marshy area. Though Bermondsey's earliest written appearance is in the Doomsday Book of 1086, it also appears in a source which, though surviving only in a copy written at Peterborough Abbey in the 12th century, claiming "ancient rights" unproven purporting to be a transcription of a letter of Pope Constantine (708-715), in which he grants privileges to a monastery at Vermundesei, then in the hands of the abbot of Medeshamstede, as Peterborough was known at the time.

Fisher Athletic FC was founded in 1908 by Michael Culiton, headmaster at Dockland School, to provide sporting facilities for underprivileged youths of Bermondsey. The club was named after the Catholic martyr Saint John Fisher. They are thus one of the few sports clubs in the world to take their name from a person. The club's closest neighbour is fellow "dockers" Millwall, but as the two teams rarely meet in a competitive match there is no strong rivalry. The team competed in various district leagues before moving to the Parthenon League where they stayed until 1965. At this point the club folded and reformed, this time based in Mitcham, joining the Western Section of the Kent Amateur League for the 1966–67 season. Fisher were elected to the Spartan League in 1974 and won back-to-back championships in 1980–81 and 1981–82. The latter season coincided with a move to their present home, the purpose-built stadium at Surrey Docks. Fisher were elected to the Southern League's Southern Division for the 1982–83 season and won the championship at the first attempt, earning promotion to the Southern League Premier Division. 1984–85 saw Fisher reach the first round of the FA Cup, losing 1–0 to Bristol City.

This Pieman travelled to the Surrey Docks Stadium on Easter Bank Holiday Monday, having been to Upton Park in the morning to watch West Ham play Spurs. My journey took me to Rotherhithe station, which is no more than 10 minutes walk from the stadium. Former Spurs and England man Peter Taylor played for Dartford (player manager). An entertaining encounter resulted in a 2-1 victory for the home side. 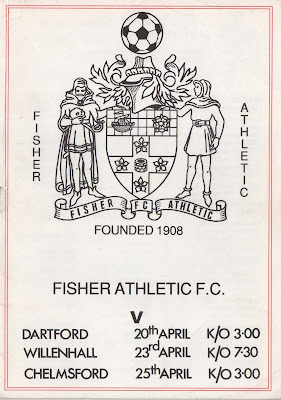