Darlington is a market town and the major settlement in the Borough of Darlington in the ceremonial county of County Durham in the North East of England. Historically part of County Durham, the town is now a separate unitary Borough and is part of the Tees Valley economic area. The town lies on the small River Skerne, a tributary of the River Tees, not far from the main river. The town owes much of its development to the influence of local Quaker families during the Victorian era, and it is famous as the terminus of the world's first passenger railway. The railway station is an important stop on the East Coast Main Line. Darlington started life as an Anglo-Saxon settlement. The name Darlington derives from the Anglo-Saxon Dearthington, which seemingly meant 'the settlement of Deornoth's people' but by Norman times the name had changed to Derlinton. During the 17th and 18th centuries the town was generally known by the name of Darnton. Darlington has an historic market area in the town centre. Built in 1183, the Grade I listed St Cuthbert's Church is one of the most important early English churches in the north of England. 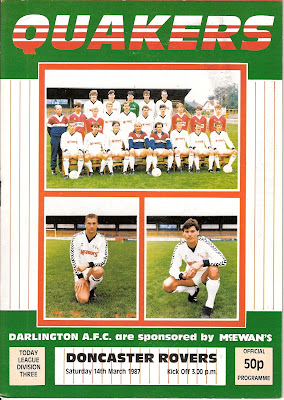 This Pieman visited Feethams on a March Saturday. The journey by train from London Kings Cross took two and a half hours. After some liquid refreshment near the Market Square it was over to the ground for the match. Unusually to access the football ground you had to walk through the cricket ground. A very entertaining match saw visitors Doncaster Rovers take a point following a 2-2 draw.