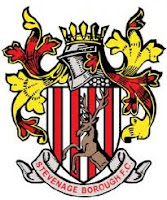 Stevenage is a town and borough in Hertfordshire, England. It is situated between Letchworth Garden City to the north and Welwyn Garden City to the south. Stevenage lies near the line of the Roman road from Verulamium to Baldock. Some Romano-British remains were discovered during the building of the New Town, and a hoard of 2,000 silver Roman coins was discovered in 1986 during new house building in the Chells Manor area. The most substantial evidence of activity from Roman times is Six Hills, six tumuli by the side of the old Great North Road - presumably the burial places of a local family. A little to the east of the Roman sites the first Saxon camp was made in a clearing in the woods where the church, manor house and the first village were later built. Similar settlements sprang up in Chells, Broadwater and Shephall. In the Doomsday Book, the Lord of the Manor was the Abbot of Westminster Abbey. The settlement had moved down to the Great North Road and in 1281 it was granted a Royal Charter to hold a weekly market and annual fair. The High Street is closed for an annual fair even today. The earliest part of St Nicholas Church dates from the 12th century, but it was probably a site of worship much earlier. The known list of priests or rectors is relatively complete from 1213. In 1857 the Great Northern Railway was constructed, and the era of the stagecoach had ended. Stevenage grew only slowly throughout the 19th century and a second church (Holy Trinity) was constructed at the south end of the High Street. In 1861 Dickens commented "The village street was like most other village streets: wide for its height, silent for its size, and drowsy in the dullest degree. The quietest little dwellings with the largest of window-shutters to shut up nothing as if it were the Mint or the Bank of England." In 1928, Philip Vincent bought the HRD Motorcycle Co Ltd out of receivership, immediately moving it to Stevenage and renaming it the Vincent HRD Motorcycle Co Ltd. He produced the legendary motorcycles, including the Black Shadow and Black Lightning, in the town until 1955. The pedestrianised town centre was the first purpose built traffic-free shopping zone in Britain, and was officially opened in 1959 by the Queen.

Stevenage Borough were formed in 1976 following the bankruptcy of Stevenage Athletic. Chairman Keith Berners and "a number of like-minded volunteers" were tasked with arranging a team to play Hitchin Town Youth at Broadhall Way in November 1976, as a "curtain-raiser" for the new club. However, the Broadhall Way pitch was subsequently dug up for non-footballing purposes after the council sold the land to a local businessman; who dug a trench across the full length of the pitch to ensure no football was played. Consequently, the new club started out playing in the Chiltern Youth league on a roped-off pitch at the town's King George V playing fields, and moved up to intermediate status joining the Wallspan Southern Combination shortly after. In 1980, the club reacquired the lease for Broadhall Way and the asset passed on to Stevenage Borough Council, who in turn allowed the football club to become its tenant. The club were also granted consent to incorporate the name “Borough” in their title and to adopt the town’s civic emblem as the club badge. With the council as their landlords and a refurbished stadium, Stevenage Borough took on senior status and joined the United Counties Football League in the same year. The club's first competitive league match was a 3–1 victory over ON Chenecks on 16 August 1980, played in front of 421 people. In their first season as a senior club, the side won the United Counties League Division One championship, scoring over a hundred goals en route to taking the title. The club also secured the United Counties League Cup the same season. After three successive seasons in the United Counties Premier Division, the club joined Division Two North of the Isthmian League in 1984, and the following season earned promotion to Division One after finishing the season as champions. This Pieman visited Broadhall Way, travelling by train from London Kings Cross for this evening fixture. The walk from the station to the ground taking around 25 minutes. A young Spurs side eased to a 3-0 victory on the night. 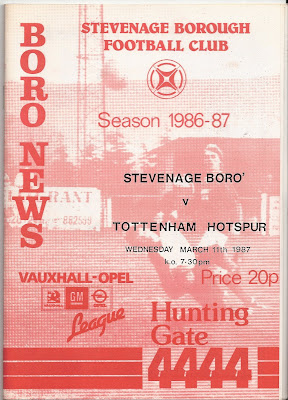