Hartlepool is a town in County Durham, and is part of the Tees Valley economic area in the North East of England. It was founded in the 7th century AD, around the Northumbrian monastery of Hartlepool Abbey. The village grew during the Middle Ages and developed a harbour which served as the official port of the County Palatine of Durham. A railway link from the north was established from the South Durham coalfields to the historic town. An additional link from the south, in 1835, together with a new port, resulted in further expansion, with the establishing of the new town of West Hartlepool. Industrialisation and the establishing of a shipbuilding industry during the later part of the 19th century caused Hartlepool to be a target for the German Navy at the beginning of the First World War. A bombardment of 1150 shells on 16 December 1914 resulted in the death of 117 people. Hartlepool is famous for allegedly executing a monkey during the Napoleonic Wars. According to legend, fishermen from Hartlepool watched a French warship founder off the coast, and the only survivor was a monkey, which was dressed in French military uniform, presumably to amuse the officers on the ship. The fishermen assumed that this must be what Frenchmen looked like, and after a brief trial, summarily executed the monkey. Although a popular story, it seems unlikely to be true. Historians have also pointed to the prior existence of a Scottish folk song called "And the Boddamers hung the Monkey-O". It describes how a monkey survived a shipwreck off the village of Boddam near Peterhead in Aberdeenshire. Because the villagers could only claim salvage rights if there were no survivors from the wreck, they allegedly hanged the monkey. There is also an English folk song detailing the later event called, appropriately enough, "The Hartlepool Monkey". In the English version the monkey is hanged as a French spy. 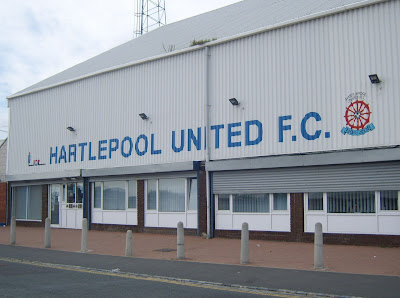 The football club was founded in 1908 as Hartlepools United Football Athletic Company. In 1968 the "s" and the "United" were dropped from the team name. This was in connection with West Hartlepool being absorbed along with the old smaller town of Hartlepool and the village of Hart into one new borough named "Hartlepool". The appendage of "United" was finally restored in 1977. In 1920, the Football League formed a third division. This was based almost entirely in the south, as the new division was created by absorbing virtually the entire top division of the Southern League, with Grimsby Town the only northern representative. This was rectified the following season when a Third Division North was created, with Hartlepools one of the founder members. Brian Clough was invited to manage Hartlepool in 1965. His reaction was "I don't fancy the place," but he took the job, anyway.


This Pieman visited Victoria Park on a bleak October Saturday to witness a bleak 0-0 draw with Torquay United in a Football League, Division Four fixture. Not the most entertaining of matches but a few pints of the local brew, Cameron's Strongarm, helped numb the pain! 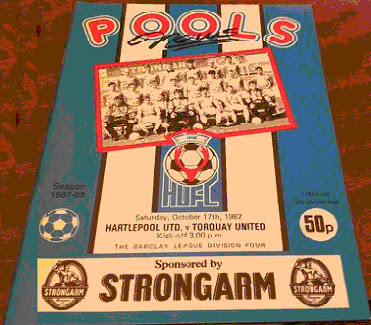