Carlisle is the county town of Cumbria, and the major settlement of the wider City of Carlisle in North West England. Carlisle is located at the confluence of the rivers Eden, Caldew and Petteril, 10 miles south of the Scottish border. Historically part of Cumberland, the early history of Carlisle is marked by its status as a Roman settlement, established to serve the forts on Hadrian's Wall. The introduction of textile manufacture during the Industrial Revolution began a process of transformation for Carlisle, which developed into a densely populated mill town. This, combined with its strategic position, allowed for the development of Carlisle as an important railway town, with seven railway companies sharing Carlisle railway station. Blue Peter presenter Helen Skelton was born in Carlisle. 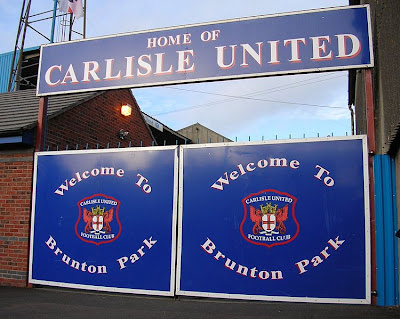 Carlisle United F.C was formed on 17 May 1904 at Shaddongate United's annual general meeting where the club's members voted to change the team's name to Carlisle United. The newly formed club initially played at Milhome Bank and later at Devonshire Park; finally settling at their current home Brunton Park in 1909. Carlisle is the smallest location, by population, to have had a resident top-flight English football club since 1906.

Brunton Park is split into four separate stands; The Warwick Road End, The East Stand, The Main (West) Stand and The Petteril End, which is an uncovered terrace. The stadium is a very traditional old fashioned style venue.
The Pieman’s visit took place on a dull November Saturday facilitated by the long rail journey direct from London Euston. The added bonus to this is the spectacular scenery viewed from the train as it travels through the Lake District. On arrival at Carlisle, it only took about 15 minutes to walk down Warwick Road to the ground. Before the match we enjoyed the company of some visiting Newport County fans in the pub nearest to the stadium. Carlisle United were worthy winners on the day beating their Welsh visitors 3-1. 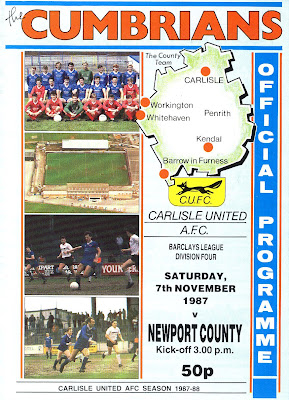