St Albans is a city and un-parished area in southern Hertfordshire, England, around 19 miles north of central London. It forms the main urban area of the City and District of St Albans. It was the first major town on the old Roman road of Watling Street for travellers heading north and became the Roman city of Verulamium. It is a historic market town and is now a dormitory town within the London commuter belt. The St Albans area has a long history of settlement. The Celtic Catuvellauni tribe had a settlement at Prae Hill a mile or so to the west. The Roman city of Verulamium, second-largest town in Roman Britain after Londinium, was built alongside this in the valley of the River Ver a little nearer to the present city centre. After the Roman withdrawal the town became the centre of the territory or regio of the Anglo-Saxon Waeclingas tribe, being called Verlamchester or Wæclingacaester. The mediaeval town grew up on the hill to the east of this around the Benedictine foundation of St Albans Abbey. This is the spot where tradition has it that St Alban, the first British Christian martyr, was beheaded some time before AD 324. It was at one time the principal abbey in England and the first draft of Magna Carta was drawn up there, reflecting its political importance. The Abbey Church, now St Albans Cathedral (formally the Cathedral & Abbey Church of St Alban but still known locally as The Abbey) became the parish church when it was bought by the local people in 1553, soon after the priory was dissolved in 1539. It was made a cathedral in 1877 when the City Charter was granted. There is evidence that the original site was somewhat higher up the hill than the present building and there had certainly been successive abbeys before the current building was started in 1077. The growth of St Albans was generally slow before the 20th century, reflecting its status as a rural market town, a Christian pilgrimage site, and the first coaching stop of the route to and from London - a fact which also accounts for its numerous inns, many dating from Tudor times. In the inter-war years it became a popular centre for the electronics industry. In the post-World War II years it was expanded significantly as part of the post-War redistribution of population out of Greater London that also saw the creation of new towns.

Founded in April 1908, the golden period in the history of St Albans City Football Club came during the 1920s. Along with the Saints five championship successes in eight years the club also enjoyed its greatest days in the Amateur Cup. Three times in that decade St Albans reached the semi-final but progress through to the final proved to be beyond them. The same fate befell the club in 1970 leaving them with the unwanted record of having made more semi-final appearances without going on to play in the final than any other club. The 2nd Round, or equivalent, of the FA Cup has been reached on five occasions but, to date, just one league scalp has been claimed when Brentford were defeated 5–3 in 1924. The most prestigious cup won by the Saints was the London Senior Cup in 1971 while ten other cups have been won a total of 49 times. 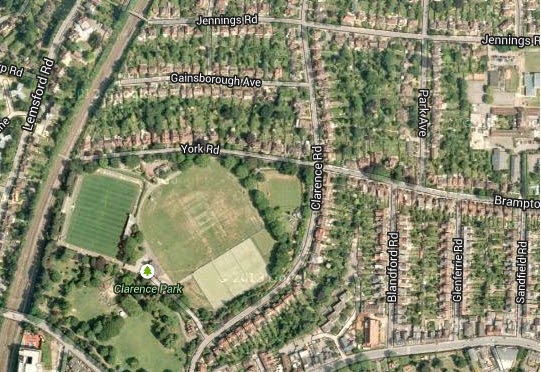 This Pieman travelled to Clarence Park by train from London St Pancras. From the station it takes no more than 5 minutes to reach the public park within which the ground is situated. A strong Tottenham Hotspur side won the match 6-0. 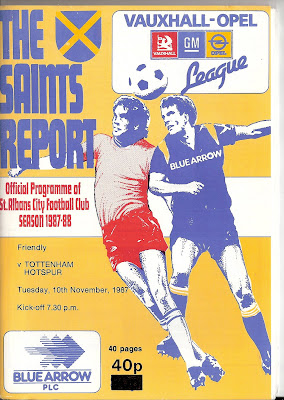