Bradford lies at the heart of the City of Bradford, a metropolitan borough of West Yorkshire, in Northern England. It is situated in the foothills of the Pennines, 8.6 miles west of Leeds, and 16 miles northwest of Wakefield. Bradford became a municipal borough in 1847, and received its charter as a city in 1897. Following local government reform in 1974, city status was bestowed upon the wider metropolitan borough. The name Bradford is derived from the Old English brad and ford the broad ford which referred to a crossing of the Bradford Beck at Church Bank below the site of Bradford Cathedral, around which a settlement grew in Saxon times. It was recorded as "Bradeford" in 1086. Bradford rose to prominence during the 19th century as an international centre of textile manufacture, particularly wool. It was a boomtown of the Industrial Revolution, and amongst the earliest industrialised settlements, rapidly becoming the "wool capital of the world". The area's access to a supply of coal, iron ore and soft water facilitated the growth of Bradford's manufacturing base, which, as textile manufacture grew, led to an explosion in population and was a stimulus to civic investment; Bradford has a large amount of listed Victorian architecture including the grand Italianate City Hall. The textile sector in Bradford fell into decline from the mid-20th century. Since this time, Bradford has emerged as a tourist destination, becoming the first UNESCO City of Film with attractions such as the National Media Museum, Bradford City Park, the Alhambra theatre and Cartwright Hall. However, Bradford has faced similar challenges to the rest of the post-industrial area of Northern England, including de-industrialisation, social unrest and economic deprivation. 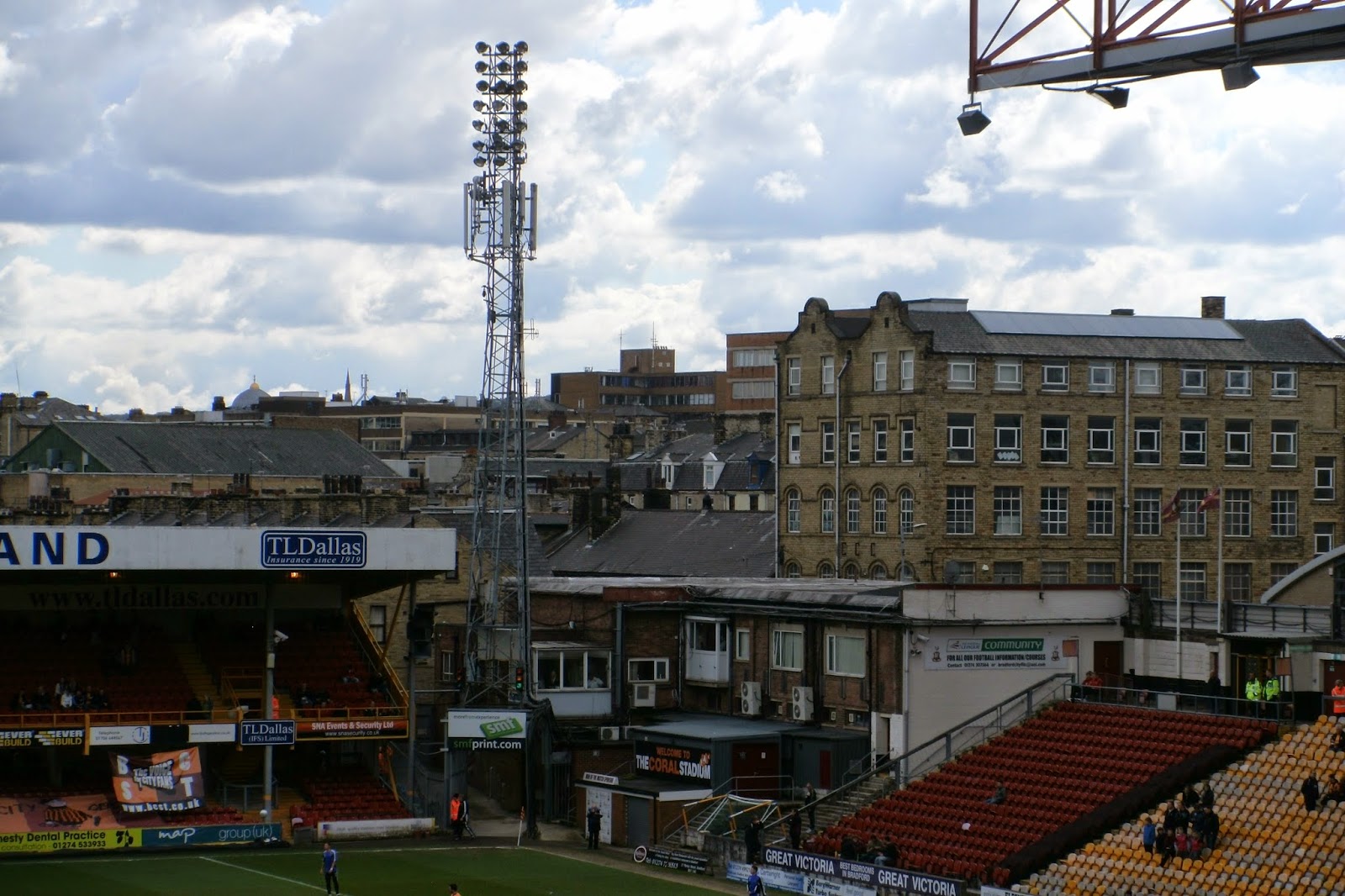 Bradford City FC was formed in 1903 as a result of a series of meetings called by James Whyte, a sub-editor of the Bradford Observer, with Football Association representatives and officials at Manningham F.C., a rugby league side. The Football League saw the invitation as a chance to promote association football in the rugby league-dominated county of the West Riding of Yorkshire. It duly elected the new club into Division Two of the league, in place of Doncaster Rovers. Four days later, at the 23rd annual meeting of Manningham FC, the committee decided to change code from rugby league to association football. Bradford City Association Football Club was formed without having played a game, taking over Manningham's colours of claret and amber, and their Valley Parade ground. City's first game was a 2–0 defeat at Grimsby Town on 1 September 1903, six days before their first home game attracted 11,000 fans. The club finished 10th in their first season and won the Division Two title in 1907–08 and with it promotion to Division One. City remained in the top flight up to the First World War and for three seasons afterwards, but were relegated in 1921–22 along with Manchester United. Back in Division Two, attendances dropped and City struggled for form, with five consecutive finishes in the bottom half of the table. They suffered a second relegation to Division Three (North) in 1926–27. Two seasons later City gained promotion with a record haul of 128 goals and spent the next eight seasons back in Division Two before being relegated back to Division Three (North) in 1936–37. They won the Third Division North Challenge Cup in 1939-39, but they were unable to defend the trophy because competitive football was suspended for the Second World War. After the war, City were consistently in the bottom half of the Division Three (North) table until 1955–56. After three successive top half finishes, City were placed in the new Division Three in 1958–59. Bradford spent just three seasons in Division Three, but during their relegation season in 1960–61, they upset Division One side Manchester United in the inaugural season of the League Cup. With 34 goals from David Layne, City nearly earned an instant promotion the following season 1961–62, but it did also include a record 9–1 defeat to Colchester United. Layne left for Sheffield Wednesday, and without him City finished second from bottom of the league and had to apply for re-election. Mixed fortunes over the next two decades saw the club bouncing between the two leagues until the then club chairman Bob Martin had to call in the official receivers. The club was saved by former chairman Stafford Heginbotham and former board member Jack Tordoff, but to ensure the club could start the new season, prize asset, striker Bobby Campbell was sold to Derby. City struggled but so did Campbell, and when he returned, the club went on a record run of ten successive victories. Although they missed out on promotion, City won the league the following season 1984–85, to return to the second tier of The Football League. However, City's triumph was overshadowed by the fire disaster, which killed 56 people when Valley Parade caught fire in the final game of the season. City played games away from Valley Parade for 19 months, before the new £2.6 million ground was opened.


This Pieman travelled to Bradford by train from London Kings Cross. The journey involved changing at Leeds for the onward connection to Bradford Interchange. Before the match I wandered around the Manningham Road area looking at the vast factories and mills. These relics gave a glimpse of the industrial history of the city. The match was decent resulting in a 2-0 home win. Sue Pollard (Hi-de-Hi) was a guest at the match, appearing on the pitch with a miniature horse! 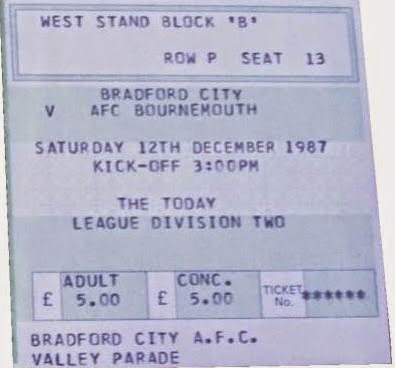 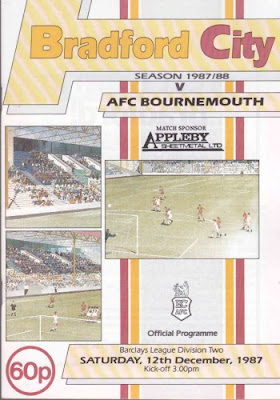