Upminster is a suburban town in east London, England, and part of the London Borough of Havering. Located 16.5 miles east-northeast of Charing Cross, it is one of the locally important district centres identified in the London Plan, and comprises a number of shopping streets and a large residential area. It was historically, a rural village in Essex and formed an ancient parish. Although peripheral to London, the town has good transport links; it was first connected to central London by rail in 1885 and has a terminal station on the London Underground network. The economic history of Upminster is characterised by a shift from farming to garden suburb. As part of the suburban growth of London in the 20th century, Upminster significantly expanded and increased in population, becoming part of Hornchurch Urban District in 1934, and has formed part of Greater London since 1965. 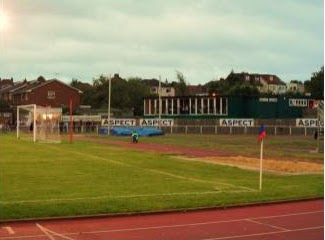 The football club’s history dates back to 1923 when the team were formed as Upminster Wanderers. The home ground was the local recreation park in Upminster. The club were quickly elected to the Romford League and won the Second Division Championship in their first season. After the Second World War the club joined the Spartan League and played in Division One East for several years before being promoted to the Premier Division. In 1953 they moved to the Delphian League and also moved into new premises and still their current home, Hornchurch Stadium at Bridge Avenue, Upminster. The club changed their name in that same year to Hornchurch & Upminster. In 1961 the club again changed its name to Hornchurch Football Club. The club were runners up for the Championship that same year, a performance which was good enough to see them gain election to the Athenian League. The club won the Division One Championship in 1967, were relegated in 1969 and promoted back again in 1971. In 1974/5 the club reached the fifth round of the very first FA Vase Competition where they lost to eventual Finalists Epsom & Ewell by one goal. That performance helped the club gain election to the Isthmian League. In 1978, the club once again suffered relegation but three years later they were back after achieving the runners up spot in the Division behind Feltham. 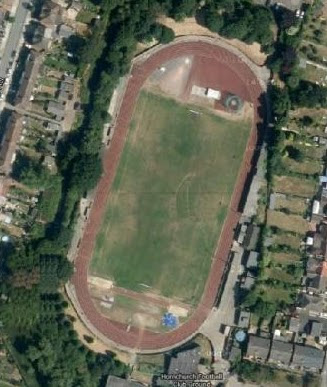 This Pieman travelled by District Line to Upminster Bridge station which is around 5 minutes walk from the stadium. Hornchurch and Harlow Town drew 2-2 in this Isthmian League Division Two North match. 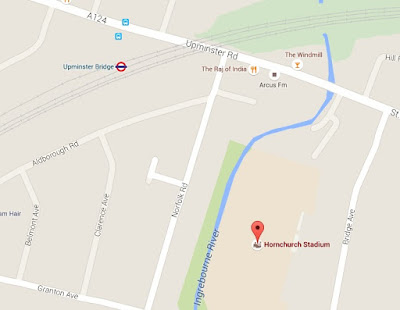 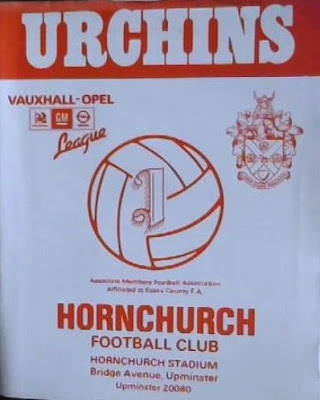