Gorgie is a densely populated area of west Edinburgh, Scotland, located near Murrayfield, Ardmillan and Dalry. The name is thought to be Brythonic in origin. Early forms suggest it derives from gor gyn – upper wedge – which may refer to the tapering shape of the land between the Water of Leith and the Craiglockhart hills. Gorgie is recorded in 12th century charters of Holyrood Abbey, when in 1236 it came into the possession of Sir William Livingston. With grain whisky consumption growing in the industrialised and railway connected Victorian era, independent distillers needed access to a high quality and high volume producer of grain whisky spirit. In 1885, major shareholders Andrew Usher, William Sanderson and John M. Crabbie, with numerous other whisky-blenders as shareholders, established the North British Distillery Company, which bought the former pig farm, and began developing a distillery. The distillery gained access to the Edinburgh Suburban and Southside Junction Railway, which began developing a railway station in Gorgie. This brought about the 1888 development of Stewart Terrace, Wardlaw Place, Wardlaw Street, and the tenement flats of Tynecastle Terrace and Ardmillan Terrace. Most of the large industrial works closed from the late 1960s to the mid-1980s, bringing high unemployment to the area. Gorgie City Farm was established by local people in 1982 on the site of a derelict railway goods yard. Set up as a community project with the aim of improving education in agriculture, horticulture and rural crafts for people living in the area.

The football club was formed by a group of friends from the Heart of Midlothian Dancing Club. The group of friends bought a ball before playing local rules football (a mix of rugby and football as we know it). In December 1873 a match was held between Queens Park and Clydesdale at Raimes Park in Bonnington. This was the first time that Association rules had been seen in Edinburgh. Members from the dance hall viewed the match and in 1874 decided to adopt the association rules. The new side was Heart of Mid-Lothian Football Club. The exact date of the club's formation was never recorded however 1874 is regarded as the year of formation as it was when association rules were taken on. The club played at sites in the Meadows, Powburn and Powderhall, before moving to Gorgie in 1881. This pitch stood on the site of the present-day Wardlaw Street and Wardlaw Terrace. As this site was then regarded as being "out of town", Hearts would sometimes stage two matches for the price of one, or set an admission price much lower than Edinburgh derby rivals Hibs. In 1886, with the city continuing to expand, tenements replaced the old ground and Hearts moved across Gorgie Road to the present site at Tynecastle Stadium, which was leased from Edinburgh Corporation.

This Pieman took an early morning train from London Kings Cross to Edinburgh; arriving in the city with plenty of time for refreshment. The match was a decent one with Hearts having enough to see off visitors Greenock Morton and progress to the next round of the cup. Haymarket station is nearer to the stadium and it was from there that I was able to catch the return train home. A long but enjoyable day trip to Scotland. 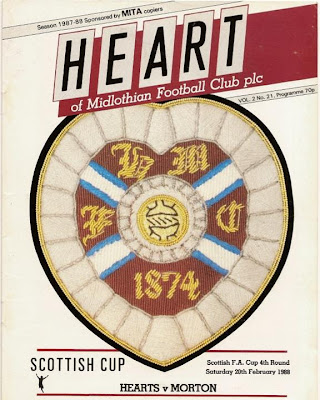 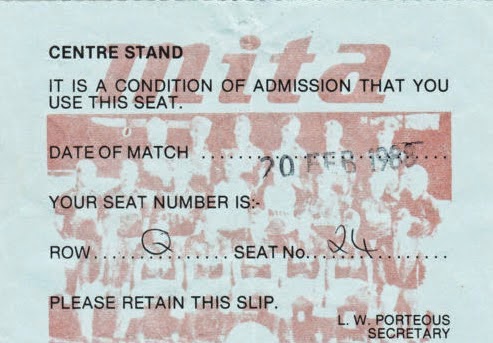