Hounslow is the principal town in the London Borough of Hounslow. It is a suburban development situated 10.6 miles (17 km) west south-west of Charing Cross. The origin of the name Hounslow is uncertain. It may derive from the Anglo-Saxon Honeslaw (meaning an area of land suitable for hunting), or from a name or description for a mound or hill associated with the pagan Hundi, of Anglo-Saxon times. Positioned on the Bath Road (where it forks to the Staines Road at the Bell Inn), Hounslow was centred around Holy Trinity Priory founded in 1211.  The priory developed what had been a small village into a town with regular markets and other facilities for travellers heading to and from London. Although the priory was dissolved in 1539 the town remained an important staging post on the Bath Road. The adjacent Hounslow Heath that had been used as a military encampment by both Oliver Cromwell and James II developed a reputation as the haunt of highwaymen and footpads. Nearby important landowners included those of Osterley House, Syon House, Hanworth Park House and Worton Hall. 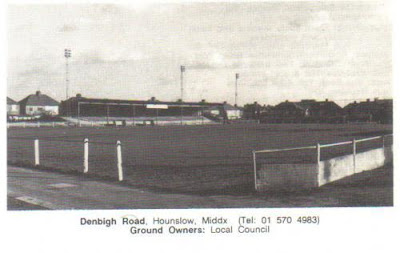 A Hounslow F.C. existed in the early part of the twentieth century, and spent 1899–1900 in the London League. The modern club was originally named Hounslow Town and joined the Corinthian League in 1946. They were league champions in 1949–50 and 1951–52. They were champions again in 1954–55 and also reached the first round of the FA Cup, where they lost 4–2 at home to Hastings United. I was able to attend this Easter Monday fixture, having earlier in the day been to Loftus Road to see Queens Park Rangers play Spurs. After the earlier match it was easy to get on the Metropolitan Line to Hammersmith, cross the road to the other part of the station and catch the Piccadilly Line to Hounslow West. From there it was only a few minutes walk to the stadium at Denbigh Road. 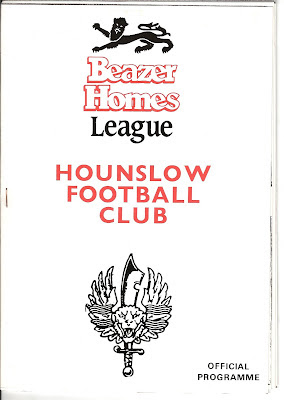