Scarborough is a town on the North Sea coast of North Yorkshire. Historically part of the North Riding of Yorkshire, the town lies between 10–230 feet above sea level, rising steeply northward and westward from the harbour on to limestone cliffs. The older part of the town lies around the harbour and is protected by a rocky headland. Scarborough is the largest holiday resort on the Yorkshire coast and has fishing and service industries. Inhabitants of the town are known as Scarborians. In the Middle Ages, Scarborough Fair, permitted in a royal charter of 1253, held a six-week trading festival attracting merchants from all over Europe. It ran from Assumption Day, 15 August, until Michaelmas Day, 29 September. The fair continued to be held for 500 years, from the 13th century to the 18th century, and is commemorated in the song Scarborough Fair. In 1626, Elizabeth Farrow discovered a stream of acidic water running from one of the cliffs to the south of the town. This gave birth to Scarborough Spa, and Dr Wittie's book about the spa waters published in 1660 attracted a flood of visitors to the town. Scarborough Spa became Britain's first seaside resort, though the first rolling bathing machines were not noted on the sands until 1735. The coming of the Scarborough–York railway in 1845 increased the tide of visitors. Scarborough railway station claims a record for the world's longest platform seat. When the Grand Hotel was completed in 1867 it was one of the largest hotels in the world and one of the first giant purpose-built hotels in Europe. Four towers represent the seasons, 12 floors represent the months, 52 chimneys represent the weeks and originally 365 bedrooms represented the days of the year. A blue plaque outside marks where the novelist Anne Bronte died in 1849. She was buried in the graveyard of St Mary's Church by the castle. 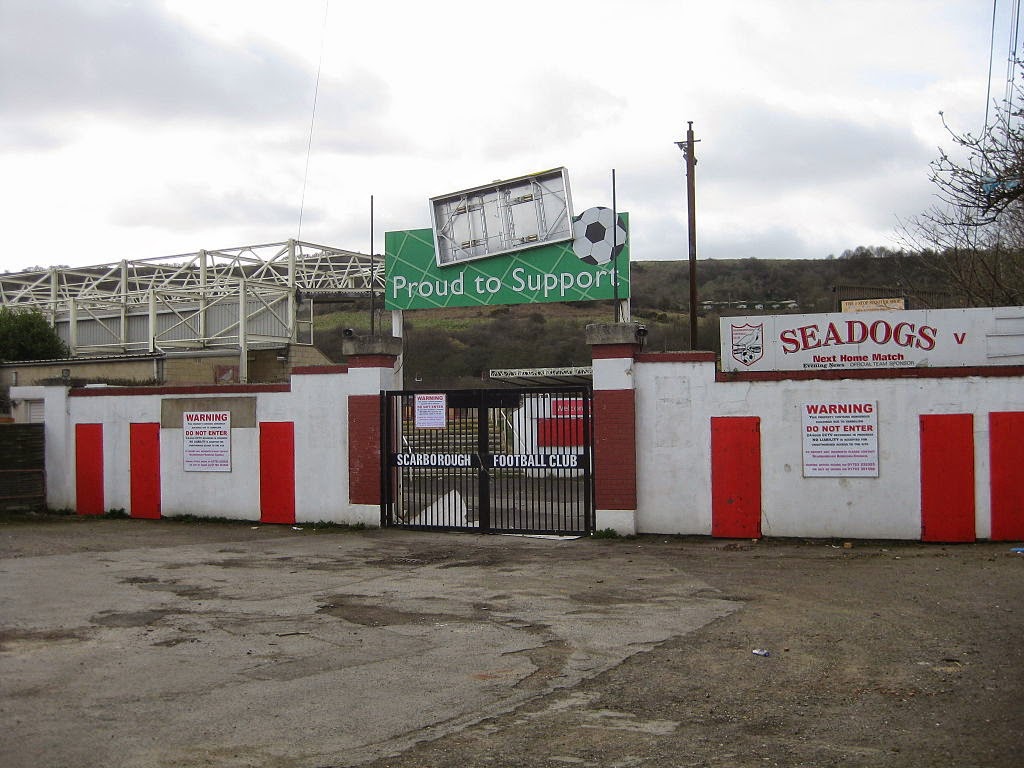 Scarborough FC was formed in 1879 by members of the town's cricket team, and played their earliest games at the cricket ground in North Marine Road. The football club soon moved to the nearby Recreation Ground. In 1898, Scarborough Football Club made the move across town to the Athletic Ground in Seamer Road. Scarborough first entered England's national cup competition, the FA Cup in 1887. Before the club became professional they spent their time competing in the Northern League. It was in 1927 the Yorkshire club became professional and joined the Midland League. After only three years they became champions of it, breaking the record for most points in a season. The same year, the club were performing respectably in the FA Cup, reaching the Third Round before going out 2–1 to Grimsby Town who were in the nation's top league at the time. Because of their decent performance in the Midlands League, the club was entitled to become one of the founding clubs in the new Northern Premier League in 1968. The 1970s would prove to be a successful time for the club; Scarborough FC won the FA Trophy three times at Wembley Stadium, beating Wigan Athletic, Stafford Rangers and Dagenham in the process. By the end of the 1970s, Scarborough had been selected to be part of the new Alliance Premier League, known today as the Football Conference. They stayed in this league for several seasons with generally consistent finishing positions in mid-table. In 1987 Scarborough were promoted into the Football League Fourth Division.

This Pieman visited Scarborough for an entertaining Division Four clash with Hereford United. The journey was made by train from London Kings Cross changing at York. The home side won the match by the odd goal in three. 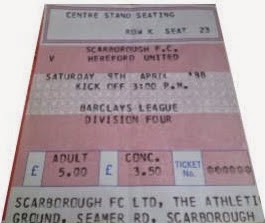 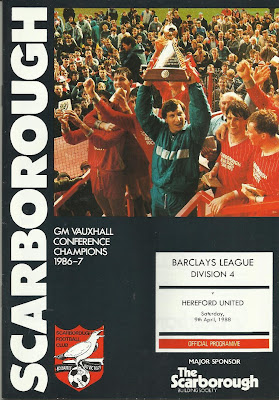