Epsom is a market town in the borough of Epsom and Ewell in Surrey. Small parts of Epsom are in the Borough of Reigate and Banstead and Mole Valley District. The town is 13.6 miles south south-west of Charing Cross, within the contiguous urban area of London. The town straddles chalk downland (topped by the Epsom Downs part of the North Downs) and the upper Thanet Beds. The eponymous racecourse at its edge holds The Derby at the start of summer, which has become the name of a major annual competition across many sports in English-speaking countries. The town also gives it name to Epsom Salts which were identified from mineral waters there. Epsom has the source of the Hogsmill stream or river and includes two semi-rural localities: Horton and Langley Vale. The name of Epsom is early recorded as forms of Ebba's ham (home or perhaps manor). Ebba was a Saxon landowner. Within the centuries-old boundaries is Epsom Downs Racecourse which features two of the five English Classic horse races; The Derby and The Oaks, which were first run in 1780 and 1779 respectively. 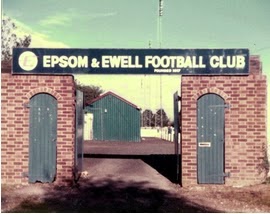 Epsom & Ewell F.C. was formed in March 1918, as Epsom Juniors Cricket Club and played during the summer of that year. In the autumn of 1918 the club became Epsom Juniors Football Club and started playing their home games at Alexandra Recreation Ground. The new football club then joined the Surrey Junior League the following season, and then became founding members of the Sutton and District League a year later. The 1922–23 campaign saw the club change its name to Epsom Town Football Club. That season then proved very successful as the club won the Sutton and District League and moved to the Southern Suburban League. More success followed as the club won the Southern Suburban League and joined the Surrey Senior League. In September 1925, the club relocated to the old Ewell F.C. ground at West Street, which was purchased through the generosity of the Club's future President Robert Bradshaw. In their second season in the Surrey Senior League, the club went on to win the league, which they also successfully defended in the following campaign. After their second league win the club moved to the premier Division of the London League for the 1927–28 campaign, where they won the league title at the first attempt. In 1960, Epsom Town changed their name to Epsom & Ewell in an attempt to increase their support across the borough. For the start of the 1963–64 season the Corinthian league merged with the Delphian League and the Athenian League keeping the latter’s name, which saw Epsom and Ewell placed in the newly created Division One. After finishing bottom of Division One twice in a row the club was relegated to Division Two at the end of the 1964–65 campaign. The club remained in the Athenian league until the end of the 1972–73 campaign when they left and rejoined the Surrey Senior League. The 1974–75 season saw the club reach the final of the FA Vase, where they missed out on a double winning season, by losing to Hoddesdon Town 2–1 although they did retain the League Cup with a win over Virginia Water. The club then rejoined Division Two of the Athenian league the season afterwards. The first season back in Division Two saw the club finish runners-up and gain promotion to Division One. After one season in Division One the club moved to the Isthmian League when this league expanded to three divisions and joined the newly created Division Two. 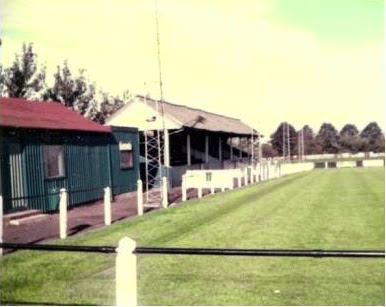 This Pieman had already attended a match between Charlton Athletic and Tottenham Hotspur in the morning of this May bank holiday. The venue for this match was Selhurst Park which facilitated a relatively straightforward train journey to Ewell West which is located very close to the West Street ground. A festival of goals ensued with the home side defeating Flackwell Heath 5-1. 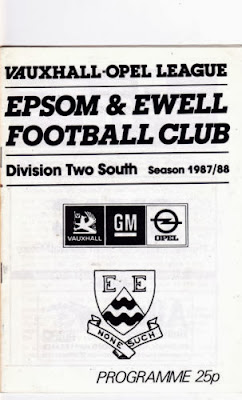