Farnborough is a town in north east Hampshire, part of the borough of Rushmoor. Farnborough was founded in Saxon times and is mentioned in the Doomsday Book of 1086. The name is formed from Ferneberga which means "fern hill". The town is probably best known for its association with aviation - Farnborough Airshow, Farnborough Aerodrome and the Air Accidents Investigation Branch. French emperor Napoleon III, his wife Empress Eugenie and son Louis Napoleon are entombed in the crypt at Saint Michael's Abbey, although it was only Eugenie who was a resident of Farnborough while alive. Paul Weller, David Mellor and Anne Robinson all went to school in Farnborough, Weller later playing at the Tumble Down Dick Inn in The Jam's formative years. The inn has been present on the A325 Farnborough Road since the 17th Century. It was reputedly connected to Richard Cromwell, and was the central focus of the town before its 19th century refocus toward North Camp and the town centre proper's 20th century development.

Farnborough Town FC was formed in 1968 and originally played at Queens Road Recreation Ground in North Camp.  Having won the Spartan League for the previous four seasons, progress was impossible due to the lack of facilities.  A move to Cherrywood Road was made, leading to acceptance into the Athenian League, Division Two, which they won at the first time of asking.  In 1977/78 season they joined the Isthmian League, Division Two, winning the Championship the following season and gaining promotion to Division One.  In 1984-85 they were Division One Champions gaining promoting to Premier Division. 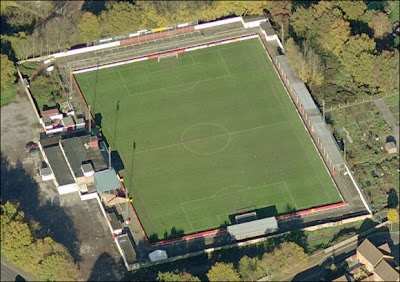 This Pieman visited Cherrywood Road for a pre-season fixture on a hot July Saturday afternoon. The home side beat young Spurs XI 2-0. The journey to Farnborough was made by train from London waterloo to Farnborough Main. From there it was around 30 minutes walk to the ground. 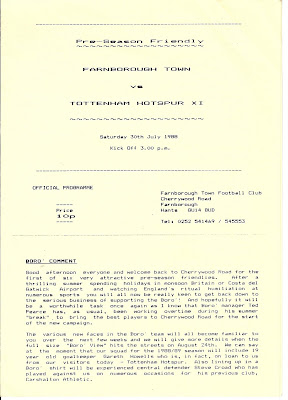