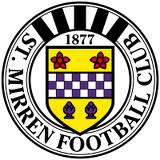 Paisley is the largest town in the historic county of Renfrewshire in the west central Lowlands of Scotland. The town is situated on the northern edge of the Gleniffer Braes, straddling the banks of the White Cart Water, a tributary of the River Clyde. The town, a former burgh, forms part of a contiguous urban area with Glasgow, Glasgow City Centre being 6.9 miles (11.1 km) to the east. The town came to prominence with the establishment of Paisley Abbey in the 12th century, an important religious hub in medieval Scotland which formerly had control over the other churches in the local area. By the 19th century, Paisley had established itself as a centre of the weaving industry, giving its name to the Paisley Shawl and the Paisley Pattern. The town's associations with political Radicalism were highlighted by its involvement in the Radical War of 1820, with striking weavers being instrumental in the protests.

St. Mirren FC was formed as a gentlemen's club which included, among other sports, cricket and rugby in the second half of the 19th century. The increasing popularity of football ensured that by 1877 the members had decided to play association football and 1877 is the football club's official foundation date. They are named after Saint Mirin, the founder of a church at the site of Paisley Abbey and Patron Saint of Paisley. There is also a street in Paisley named St. Mirren Street. The club originally wore scarlet and blue strips, but after one season changed to the current black and white striped shirts, which have been worn all bar one season in the 1900s where cream tops were used. St. Mirren played their first match on 6 October 1877, defeating Johnstone Britannia 1–0 at Shortroods. The 1890 season was an historic season for St. Mirren, as they became founder members of the Scottish League along with fellow Paisley club Abercorn. Of the 10 founder clubs, only 5 survive in the current league system. It was during the match against Morton at Cappielow in this year, that St. Mirren played one of the first night games under light from oil lamps. The club moved to Love Street in 1894 and reached their first Scottish Cup final in the 1907–08 season but were defeated 5–1 by Celtic. The Buddies went on to lift the trophy in 1926, 1959 and 1987. 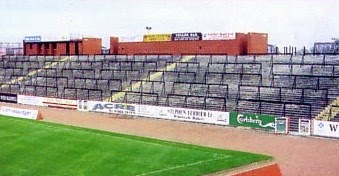 This Pieman was in Glasgow for the weekend to watch Spurs in a pre-season fixture. Aston Villa were doing likewise at St Mirren and the opportunity was taken to visit a new venue. A fairly tame encounter was won by the home side and Aston Villa's Warren Aspinall also managed to get himself sent off (not easy in this type of match). 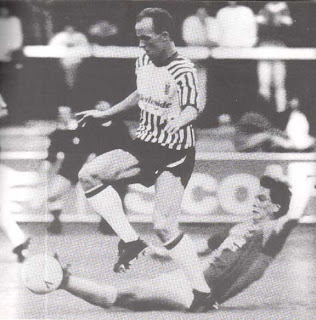 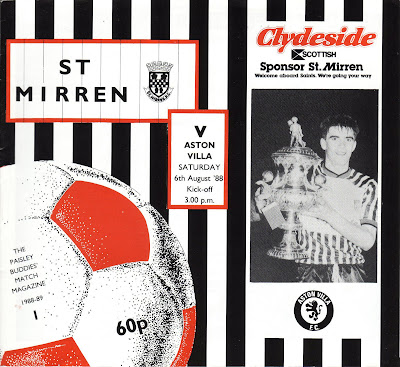