Edgware is a district of north London, in the London Borough of Barnet. Edgware is centred 10 miles north-northwest of Charing Cross and has its own commerce, many suburban streets and a farm and some elevated woodland on a high ridge marking the Hertfordshire border of gravel and sand. Edgware is a Saxon name meaning Ecgi's weir. Ecgi was a Saxon and the weir relates to a pond where Ecgi's people caught fish. Edgware parish formed part of Hendon Rural District from 1894. It was abolished in 1931 and formed part of the Municipal Borough of Hendon until 1965. The Romans made pottery at Brockley Hill, thought by some to be the site of Sulloniacis. Canons Park, to the north-west, was developed as an estate by James Brydges, 1st Duke of Chandos and was the site of his great palace Cannons.

Edgware Town FC was founded in 1939 by a group of football enthusiasts who worked for the construction and engineering firm, William Moss & Sons based in Cricklewood. The firm had taken over the sports ground located in the High Street, formerly used by Edgware Rugby Club. The club played in the Middlesex Senior League until joining the Corinthian League in the 1946–47 season. In 1948 they won the Middlesex Senior Cup. In 1963 the club transferred to Division One of the Athenian League. They finished third in their first season, and were promoted to the Premier Division. In 1966–67 they finished bottom of the division, and were relegated to Division One. This was followed by a second successive relegation to Division Two as they finished bottom of the table again. The record attendance (estimated at 8500) at the White Lion Ground was set in October 1947 for the FA Cup-tie against local rivals Wealdstone. There was another large attendance in October 1949 when an estimated 7100 saw another FA Cup-tie against Wealdstone, a game that was televised in full by the BBC. In 1972 the club was renamed Edgware. When the Athenian League disbanded in 1984 they joined the London Spartan League, before changing their name back to Edgware Town in 1987. They won the Premier Division of the Spartan League in 1987–88.

This Pieman travelled to Edgware by Northern Line underground train from Central London. The walk from the station to the ground taking a little over 5 minutes. The home side comprehensively beat visitors Hanwell Town 3-0. 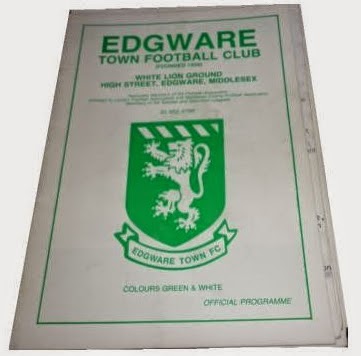