Woking is a large town and civil parish that shares its name with the surrounding local government district, located in the west of Surrey, England. It is at the southwestern edge of the Greater London Urban Area and is a part of the London commuter belt, with frequent trains and a journey time of approximately 24 minutes to Waterloo station. Woking is 23 miles southwest of Charing Cross in central London. Though Woking's earliest written appearance is in the Doomsday Book, it is mentioned as the site of a monastery in an 8th-century context, as Wochingas and was held in 1086 by King William the Conqueror, Walter FitzOther, constable of Windsor Castle, and Ansgot and Godfrey from Osbern FitzOsbern, then bishop of Exeter. The Martinsyde Aircraft Company operated a major aircraft factory in the town during World War I and used nearby Brooklands Aerodrome for test flying and deliveries, but it was closed in the mid-1920s. This site was then the home of the engineering firm James Walker & Company for many years, known as 'The Lion Works'. The Basingstoke Canal, completed in 1794, passes through the north of the town and is crossed by several footbridges and road bridges. Celebrity cook Delia Smith was born in Woking.

Woking Football Club was formed in 1889. The club joined the West Surrey League in 1895–96, winning the title by one point. However, within 21 years of being formed, the club was in danger of folding for financial reasons. The turning point came when, in January 1908, Woking played Bolton Wanderers in the First Round of the FA Cup, having made it through five qualifying rounds. Despite losing the away game 5–0, the club made it into the national news. Bolton Wanderers, impressed by the minnows they had defeated, travelled to Woking for a friendly match the following season, which kept the club solvent. In 1911 the club joined the Isthmian League, maintaining their place in the top division for 72 years and finishing as runners-up to Wycombe Wanderers in 1956–57. That achievement was eclipsed the following season when, in front of a 71,000 crowd, Woking beat Ilford 3–0 to win the FA Amateur Cup Final. The club then went into decline, culminating in a first-ever relegation in 1982–83. By the end of the 1984–85 season the club had plunged to Division Two South of the Isthmian League. It was during that season that former player, Geoff Chapple, was appointed as manager. However, Chapple was not able to save the club from relegation. The following season, the club just missed out on promotion at the first attempt. However, the club clinched the Division Two South title in 1986–87. Woking play their home games at the Kingfield Stadium. This Pieman visited Woking by train from London Waterloo. The walk from the station taking around 20 minutes. Tottenham Hotspur fielded a reserve strength side in winning this pre-season friendly 3-1. 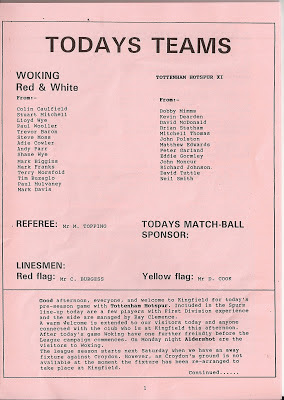