Perivale is a suburb in the London Borough of Ealing, 9.5 miles west of Charing Cross, central London. Landmarks in the suburb include the large Art Deco Hoover Building, as well as St Mary's Church, the River Brent and Perivale Wood Local Nature Reserve run by the Selborne Society. Until the 18th century Perivale was called Little Greenford or Greenford Parva, to distinguish it from Great Greenford. Perivale is an ancient parish in the historic county of Middlesex. It formed part of Greenford Urban District from 1894 to 1926, and was then absorbed by the Municipal Borough of Ealing. Before the residential building expansion of the 1930s, the fields of Perivale were used to grow hay for the working horses of Victorian London, a scene described in the ending of John Betjeman's poem 'Return to Ealing'. 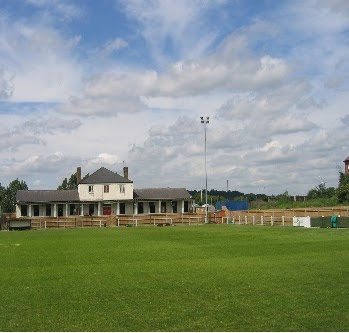 Hanwell Town FC was formed in 1920 by a group of natives of Newcastle-upon-Tyne working in the area, who adopted the black and white stripes of Newcastle United as their colours. They played in the London League during the 1920s but dropped down to more local leagues after World War II. In 1970 the team stepped up to the Middlesex County League but by the early 80s were playing in the London Spartan League. In 1983–84 they were Senior Division champions and were promoted to the Premier Division. It was also in this period that the club made their debut in the FA Cup in the 1988–89 season, making it to the Second Qualifying round, losing to Wembley 1–0 at home. Hanwell moved to the Reynolds Field ground in 1981 after over twenty years playing at the Ealing Central Sports Ground. Floodlights were installed in 1989 and inaugurated at today’s friendly match against Tottenham Hotspur.

This Pieman visited Reynolds Field, travelling by central line to Perivale. The walk from the station taking around ten minutes. An entertaining match saw a young Spurs side win by the odd goal in three. 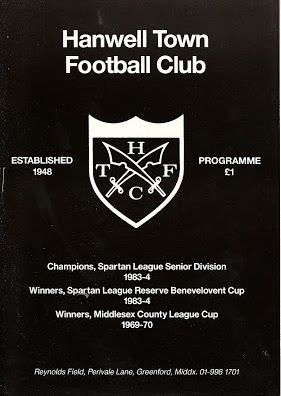