Uxbridge is a town in west London, England, and the administrative headquarters of the London Borough of Hillingdon, located 15 miles west-northwest of Charing Cross. Uxbridge historically formed part of the parish of Hillingdon in the county of Middlesex and was a significant local commercial centre from an early time. As part of the suburban growth of London in the 20th century it expanded and increased in population, becoming a municipal borough in 1955, and has formed part of Greater London since 1965. It is a significant retail and commercial centre, and is the location of Brunel University and the Uxbridge campus of Buckinghamshire New University. The name of the town is derived from "Wixan's Bridge", which was sited near the bottom of Oxford Road where a modern road bridge now stands, beside the Swan and Bottle public house. The Wixan were a 7th-century Saxon tribe from Lincolnshire who also began to settle in what became Middlesex. Anglo-Saxons began to settle and farm in the area of Uxbridge in the 5th century, clearing the dense woodland and remaining there for around 500 years. Archaeologists found Bronze Age remains (before 700 BC) and medieval remains during the construction of The Chimes shopping centre; two miles away at Denham, Upper Paleolithic remains have been found. Uxbridge is not mentioned in the Doomsday Book of the 11th century, but a hundred years later the existing church, St Margaret's, was built. The town appears in records from 1107 as "Woxbrigge", and became part of the Elthorne Hundred with other settlements in the area. Several historical events have taken place in and around the town, including attempted negotiations between King Charles I and the Parliamentary Army during the English Civil War. The public house at the centre of those events, since renamed the Crown & Treaty, still stands. Uxbridge also houses the Battle of Britain Bunker, from where the air defence of the south-east of England was coordinated during the Battle of Britain. Situated in RAF Uxbridge, the No. 11 Group Operations Room within the bunker played a crucial rule during the battle and was later used during the D-Day landings.


Uxbridge Football Club was founded in 1871 and the team started playing friendly games, until they made their debut in the FA Cup in 1873. The club folded in 1874, due to financial difficulty and was reformed five years later in 1879. The next 10 years of the club were successful, with the Heron brothers gaining full international caps for England, while playing for the club. In 1886 Uxbridge FC amalgamated with Uxbridge Crescents, and played under this name in the 1886-87 season, but changing back to Uxbridge the following season. The amalgamation also saw the club wear red shirts for the first time, which are still the colours worn today, and the nickname "The Reds" first used. The club became founder members of the Southern League in 1894, finishing in mid-table in Division Two and reached the final of the FA Amateur Cup in the 1897–98 season. The club stayed in the Southern league for five seasons, before dropping out for financial reasons to join the Middlesex league. However they only survived a single season in the Middlesex league before folding again with a debt of £130. After two seasons the club was reformed and they joined the West Middlesex league, two seasons later they joined the Great Western Combination League and remained there until The Great War. After the First World War they joined the Athenian League. At the end of the 1919–20 season Uxbridge finished second from bottom and were relegated to the Great Western Combination League. The club returned to the Athenian league 4 seasons later and staying in the Athenian league until the 1936–37 season when they failed to be re-elected after finishing bottom of the league twice. The club then moved to the Spartan League, and finished top of the league, however they were denied the championship, as it was discovered the club had played an ineligible player so they finished third when six points were deducted. The club then joined the London League the season afterwards and then rejoined the Great Western Combination League during World War II. After the war the club rejoined the London League in the 1945–46 season. The following season the club joined the Corinthian League. In 1948 a ground called "Honeycroft" was bought in Cleveland Road for £5,800, which is now part of Brunel University. The 1959–60 season was a particularly successful season with the club being Champions of the Corinthian League. The club remained in the Corinthian league, until the end of the 1962–63 season, when as a result of a restructuring of Non-league football the league was disbanded, and were placed in Division one of the Athenian League. At the end of the 1966–67 season the club was relegated to Division two, which led to the club facing financial difficulties again and the ground was mortgaged, but they still continued and gained national prominence in 1976 when they met a full strength England side at Wembley Stadium as part of World Cup preparations. The score: England 8 Uxbridge 0. In 1978 the club bought its current ground in West Drayton and also called the ground "Honeycroft". The club spent over £170,000 on ground improvements and a 1–1 draw with Arsenal in 1981 saw the official opening of the new floodlights. The 1981–82 season saw the club finish third in the Athenian League and achieve election into the Isthmian League. The club finished second in Division Two South in 1984–85 and gained promotion to Division One. 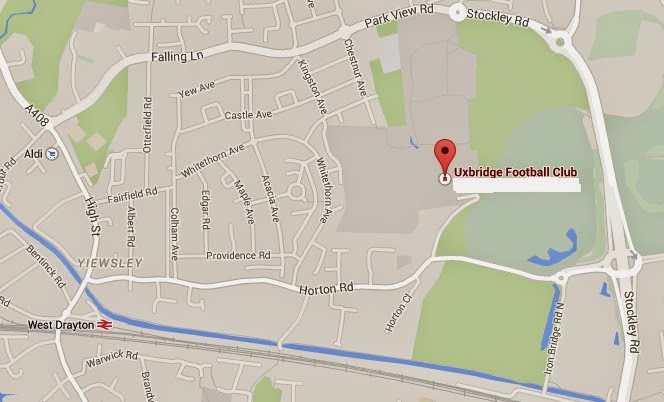 This Pieman visited Honeycroft by train, travelling from London Paddington to West Drayton. From the station it took around 15 minutes to walk to the ground. A close match saw the home side defeat Kingsbury Town by the only goal. 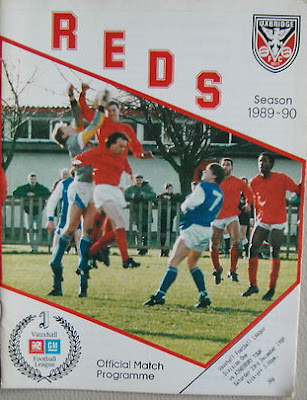