Greenford is a large suburb in the London Borough of Ealing in West London. It is an ancient parish in the historic county of Middlesex. It is approximately 11 miles (18 km) from Charing Cross in Central London. Nearby places include Yeading, Hanwell, Perivale, Southall, Northolt, Ealing, Sudbury, Harrow and Wembley. The name is first recorded in 848 as Grenan forda. It is formed from the Old English 'grēne' and 'ford' and means 'place at the green ford'. Greenford was known as Great Greenford in order to distinguish it from Little Greenford, which is now known as Perivale. Greenford is considered to be the birthplace of the modern organic chemical industry, as it was at William Perkin's chemical factory in North Greenford, by the Grand Union Canal, that the world's first aniline dye was discovered in March 1856. Perkin called his amazing discovery 'mauveine'. Greenford is also home to the Hovis factory. The former Rockware glassworks on the canal is commemorated by Rockware Avenue. Greenford formed part of Greenford Urban District from 1894 to 1926 and was then absorbed by the Municipal Borough of Ealing.


Viking Sports was founded in 1945 by Roy Bartlett, and the club grew out of an occasional works club assembled at Roy's workplace during the Second World War, the A.E.C factory in Southall. With the end of the war in 1945, the club acquired its name, 'Viking' (the suffix 'Sports' would emerge later with the formation of affiliated sister clubs such as judo and fencing). It was during the 1950s that the club truly began to take shape. No longer merely a local youth side as the founding players grew older, the club accelerated through the five divisions of the Dauntless League, and, after gaining admittance to the Amateur Football Alliance, similarly steamrolled through the three divisions of the Nemean League. In the 1960s the club embarked on a series of ambitious overseas tours, establishing a tradition that would become an indelible mark of the club’s identity. Back home the club went from strength to strength, moving to their own ground in 1966 at Avenue Park, just off the A40 Western Avenue, and gaining election first to the Middlesex League in 1969. They joined the Hellenic League Division One in 1980 winning the Hellenic League Championship in 1986 and promotion to the Premier Division. In 1989 they were relegated back to Division One, before joining the Combined Counties League in 1991.

This Pieman visited Avenue Park for a midweek fixture. Visitors Ashford Town (Middlesex) took the points in this Combined Counties League match with a 2-0 victory. 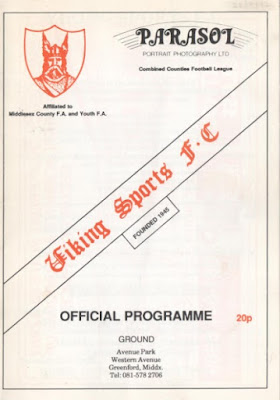