Heybridge is a civil parish and large village, in the district of Essex, England. It is adjacent to Maldon, near the River Blackwater. It is often overshadowed by its historic neighbour, and one could mistakenly think it to be the same town, as the two have merged with one another over the years. Heybridge was originally called Tidwalditun. The name Heybridge came from the high bridge that was built over the River Blackwater in the Middle Ages, at Heybridge Square (the junction of Heybridge Street, Holloway Road, and the Causeway). This was a 5-arched stone bridge and it was replaced in 1870 by a 2-arched brick one. Much of the water flow down this part of the river had, by then, been diverted into the River Chelmer by diversion work done during construction of the Chelmer and Blackwater Navigation. Heybridge was an agricultural village until the 1970s and 80s, when a considerable proportion of the local farmland was given over to house building. The main industry in Heybridge itself, until it ceased trading in 1984, was the agricultural machinery manufacturer E H Bentall & Co. Established in 1805 on the south bank of the Chelmer and Blackwater Navigation, the company grew to be a large factory complex that operated for nearly 180 years. 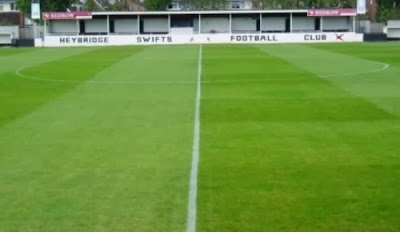 Heybridge Swifts FC was formed in 1880, but the club's first foray into senior football did not come until 1971 when they were founder members of the Essex Senior League. In between that time the club was almost put out of existence when they were evicted from their previous home at Bentall’s Sports Ground in 1964, as it was sold to be made into a shopping precinct. The club then became tenants of neighbours Sadd’s Athletic for two years, but they managed to acquire in time the former carrot field in Scraley Road, which became their new home. After finishing in second place in Essex Senior League at the end of the 1980–81 season the club claimed the league championship in the following three seasons, after which they were admitted to the Isthmian League, initially in Division Two North, which they won in the 1989–90 season. 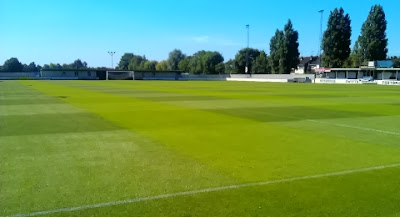 This Pieman visited Scraley Road by public transport. A train to Chelmsford was followed by a bus to Heybridge. Visitors Croydon FC (apart from being beaten 3-0) had been delayed on their journey to Essex and as a result the match kicked off later than the scheduled 3pm. This meant missing the last bus back to Chelmsford. However, a short walk to Maldon enabled a later bus connection.