Bognor is one of the oldest recorded Anglo-Saxon place names in Sussex. In a document of 680 AD it is referred to as Bucgan ora meaning Bucge's (a female Anglo-Saxon name) shore, or landing place. Bognor Regis was originally named just "Bognor", being a fishing (and one time, smuggling) village until the 18th century, when it was converted into a resort by Sir Richard Hotham. Bognor was a part of the ancient parish of South Bersted in the county of Sussex, attaining parish status separate from South Bersted in 1828. Until 1894 it formed part of the Hundred of Aldwick, an ancient division of Chichester Rape. From 1894 to 1974 it was part of Bognor Urban District (Bognor Regis Urban District from 1929), and since 1974 it has been a part of Arun District. On the beach between Bognor Regis and Aldwick lies the wreck of a Floating Pontoon. It is part of the Mulberry Harbour which was towed across to Normandy on D-Day 6 June 1944. This particular section of Mulberry did not make it across the Channel and was washed up on the beach shortly after D-Day. It is clearly visible at low tide throughout the year. Sir Billy Butlin opened one of his Butlin’s Holiday Camps in Bognor in 1960. The camp later became known as Southcoast World until 1998 and is now known as Butlin's Bognor Regis Resort.

Bognor Regis Town FC play at Nyewood Lane, which has a capacity of 4,000, of which 350 are seated. There is covered accommodation on three sides. The ground's first set of floodlights, were bought from Wembley Stadium and fitted onto telegraph poles. In the 1970s, the current floodlight pylons were added, with four along each touchline.This Pieman travelled to the south coast by train and walked to the ground (about 25 minutes) from the station. A professional effort from visitors Leyton-Wingate saw them take the points courtesy of the only goal. 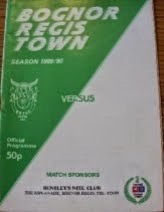