Kingston upon Thames is the principal settlement of the Royal Borough of Kingston upon Thames in southwest London. It was the ancient market town where Saxon kings were crowned and is now situated 10 miles (16.1 km) south west of Charing Cross. The name means 'the king's manor or estate' from the Old English words cyning and tun. It belonged to the king in Saxon times and was the earliest royal borough. It was first mentioned in 838 as the site of a meeting between King Egbert of Wessex and Ceolnoth, Archbishop of Canterbury. Kingston lay on the boundary between the ancient kingdoms of Wessex and Mercia, until in the early tenth century when King Athelstan united both to create the kingdom of England. Probably because of the town's symbolic location, several tenth century kings were crowned in Kingston. It was later thought that the coronations took place in the chapel of St Mary, which collapsed in 1730, and a large stone recovered from the ruins has been regarded since the eighteenth century as the Coronation Stone. It was initially used as a mounting block, but in 1850 it was moved to a more dignified place in the market before finally being moved to its current location in the grounds of the guildhall. For much of the 20th century, Kingston was a major military aircraft manufacturing centre specialising in fighter. The legendary Sopwith Camel, Hawker Fury, Hurricane, Hunter and Harrier were all designed and built in the town and examples of all of these aircraft can be seen today at the nearby Brooklands Museum in Weybridge.

Kingstonian FC was officially formed in 1919 as a result of the merger between Kingston Town FC and Old Kingstonians FC, the club can trace its origins back even further to Kingston & Surbiton YMCA FC who played their first match on a ground in Bushy Park in November 1885. They played in the Athenian League, winning the competition in 1923/24 and 1925/26. In 1929 they joined the Isthmian League as a replacement for the Civil Service FC, and have remained in that league ever since. April 1933 saw the first taste of real glory as Kingstonian won the FA Amateur Cup, and the following season the Isthmian League, a feat they repeated in 1936/37. Since forming the club had played at the famous Richmond Road ground, but this had become increasingly dilapidated and vandalised, so the club sold up in January 1988 playing their last game against Bromley. After one and a half season's ground sharing at Hampton's Beveree ground, in August 1989, Kingstonian opened their brand new Kingsmeadow Stadium (on the site of the old Norbiton Sports Ground), when Slough Town were the visitors. 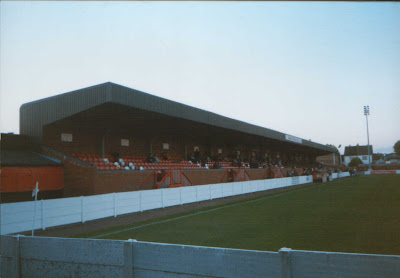 On a very wet Saturday afternoon, this Pieman was pleased to find that this FA Trophy tie had survived when many other matches had not. Kingstonian edged to a narrow victory over Hyde United in a competitive encounter played on a fine pitch. 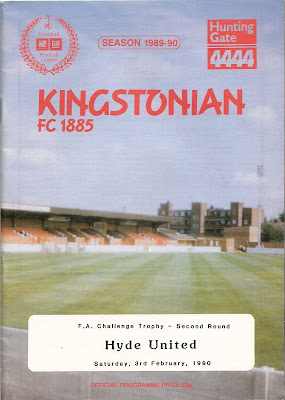