Brantham is a village and civil parish in Suffolk, United Kingdom. Located in Babergh district, it is situated 2 miles north of Manningtree and 9 miles south west of Ipswich. Brant is Anglo-Saxon for 'hill' and ham means 'village'—hence, 'village on the hill'. Brantham is about half a mile from Manningtree station. A long railway cutting runs past the village. At one point, near Brantham Bull Public House, it is the deepest railway cutting in Suffolk. There was once a siding to Marsh Farm, where fresh fruit and vegetables were loaded for London, and a siding going into the old BX Plastics factory (now derelict) for loading and unloading materials. Both were disused by the end of the 1930s. The Tudor didactic poet Thomas Tusser is believed to have written his most famous work "A Hundreth Good Pointes of Husbandrie" at Braham Hall. Brantham Athletic Football Club was founded in 1887 and the team was basically drawn from employees from BX Plastics, a manufacturing firm from London, who after a massive explosion at their works in East London moved the factory down to the Suffolk/Essex countryside. For some time, the club adopted the name Brantham Crown, but reverted to their original name in 1906.

This Pieman travelled by train from London Liverpool Street to Manningtree Station from where a short walk was all that was required to reach Brantham and the Brantham Leisure Centre. Tottenham Hotspur sent a young reserve side to Suffolk for this Friday evening friendly fixture, winning 4-1. 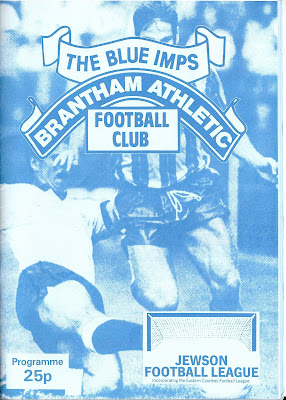