Grays is the largest town in the borough and unitary authority of Thurrock in Essex and one of the Thurrock's traditional (Church of England) parishes. It is situated approximately 20 miles to the east of London on the north bank of the River Thames, and near the M25 motorway. Samuel Pepys famously recorded in his diary that he visited Grays on September 24, 1665 and apparently bought fish from the local fishermen. Parts of Grays and Chafford Hundred are set within three Victorian chalk pits; the largest two being the Lion Gorge, and the Warren Gorge. Another area of the Chafford Hundred residential development is built on a Victorian landfill site. Thurrock is a Saxon name meaning "the bottom of a ship". The element "Grays" comes from Henry de Grai, a descendant of the Norman knight Anchetil de Greye, who was granted the manor of Grays Thurrock in 1195 by Richard I. 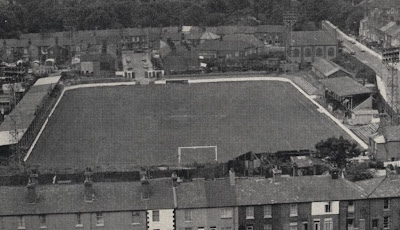 Grays Juniors were founded in 1890 as an amateur club, rising through the ranks to senior status, before merging with former Southern League club Grays United to form Grays Athletic. The newly formed club joined the Grays & District League Division. Other teams competing in Grays at the time were Grays Amateurs, Grays Avenue Swifts, Grays Hotspurs and Grays Wednesday – with whom they shared the Recreation Ground pitch.  Grays Athletic became founder members of the Athenian League, in which they briefly played before World War I (1912–1914, and again since 1958). In 1945 they were one of the nine founder members of the Corinthian League, which they won that first season. The record attendance of 9,500 was set in 1959 during an FA Cup tie with Chelmsford City. In 1981 the Club Patron, Mr. Ron Billings, ensured the future of Grays Athletic at the Rec by purchasing the ground. This Pieman visited the Recreation Ground having travelled to Grays by train from London Fenchurch Street. This particular match was arranged to celebrate the centenary of Grays Athletic FC. Tottenham Hotspur sent a strong side to Grays and an entertaining match ended 2-2. 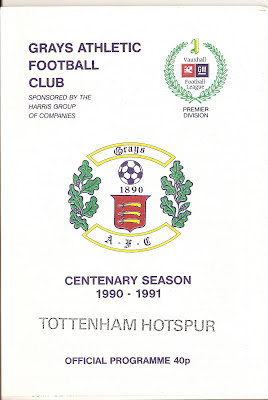