Waltham Abbey is a market town in Epping Forest District in the southwest of the county of Essex, 15 miles NNE of London on the Greenwich Meridian, between the River Lea in the west and Epping Forest in the east. The name Waltham derives from weald or wald "forest" and ham "homestead" or "enclosure". The name of the ancient parish was Waltham Holy Cross, but the use of the name Waltham Abbey for the town seems to have originated in the 16th century, although there has often been inconsistency in the use of the two names. Indeed, the former urban district was named Waltham Holy Cross-, rather than Waltham Abbey. There are traces of prehistoric and Roman settlement in the town. Ermine Street lies only 5 km west and the causeway across the River Lea from Waltham Cross in Hertfordshire may be a Roman construction. A local legend claims that Boudica's rebellion against the Romans ended in the neighbourhood, when she poisoned herself with hemlock gathered on the banks of Cobbins Brook. Another legend has it that after his death at the Battle of Hastings in 1066; Harold's body was brought to Waltham for burial near to the High Altar. Today, the spot is marked by a stone slab in the churchyard (originally the site of the high altar prior to the Reformation). In 1177, as part of his penance for his part in the murder of Thomas Becket, Archbishop of Canterbury, Henry II refounded Harold's church as a priory of Augustinian Canons Regular of sixteen canons and a prior or dean. In 1184, this was enlarged so that Waltham became an abbey with an abbot and twenty-four canons, which grew to be the richest monastery in Essex. To the abbey's west and south, the town grew as a linear development around a crossing road, although it had a single north-south "High Street" as late as 1848. In the 17th century, the River Lea opened a gunpowder factory in the town, no doubt due to good river communications and empty marshland. The factory was sold to the government in 1787 and was greatly expanded during the next century, becoming the Waltham Abbey Royal Gunpowder Mills. In the 19th century, searches began for more powerful and reliant propellant explosives, and guncotton was developed here by Frederick Abel, starting in 1863. Cordite production began in 1891 and the site was enlarged several times. The site was an obvious target during World War II, and a German V-2 rocket landed near the factory in Highbridge Street on 7 March 1945, causing considerable damage to property and large loss of life. The factory eventually closed in 1943, and the site was developed into an explosives research establishment. In the first half of the 20th century, the area was extensively covered in glass-houses and market gardens. Gravel extraction has also long been a major industry in the Lea Valley, leaving a legacy of pits now used for recreation and an important wildlife habitat. In 1959–60 all of the church's houses and land were converted to stock or bank investments. In the 1960s and 1970s, the population of the town increased, partly by an extensive programme of clearances and redevelopment in the town centre, and partly by the development of housing estates on the outskirts. It has developed into a dormitory town with pockets of light industry and the close proximity of the M25.

Waltham Abbey Youth Club, first played football at “Capershotts” during the Second World War and in later years the club became known as firstly Waltham Abbey, then Abbey Sports. Both clubs gained numerous honours in the Northern Suburban League. The club was founded in 1944 with a mix of players from Waltham Abbey Youth Club and former juniors from Tottenham Hotspur under the leadership of the trainer and manager Wally Hickman. In their early years they played to a high standard and reached the final of the Herts Junior Cup in three years out of four but lost on each occasion – including a loss to Redbourn Rovers of 4–5 after they had been leading 4–1. Some of the leading players in the early years included left winger Dave Cook who was killed in a road crash, centre-half Robbo Robinson and inside forward Frank Blower. Frank later became a dedicated treasurer of the club with Ray Buck as a similarly dedicated club secretary. Waltham Abbey United emerged in the late sixties and a new clubhouse was built. In 1974 the club amalgamated with the successful Beechfield Sports and joined the Metropolitan League, which later became the London Spartan League. In 1976 the club won the Essex Junior Cup and later that summer dropped the Beechfield Sports tag on the advice of The FA becoming Waltham Abbey FC. Two years later the club reached the final of the Essex Intermediate Cup, wining the league’s Division One title and having gained Senior Status, promotion. In their first season they won the title without losing a game and were again promoted this time to the Premier Division where they have remained since. This Pieman travelled by train to Waltham Cross from where it took around 25 minutes to walk to the ground via Waltham Abbey town centre. Crystal Palace eased to victory in the match which was to mark the newly installed floodlights at Capershotts. 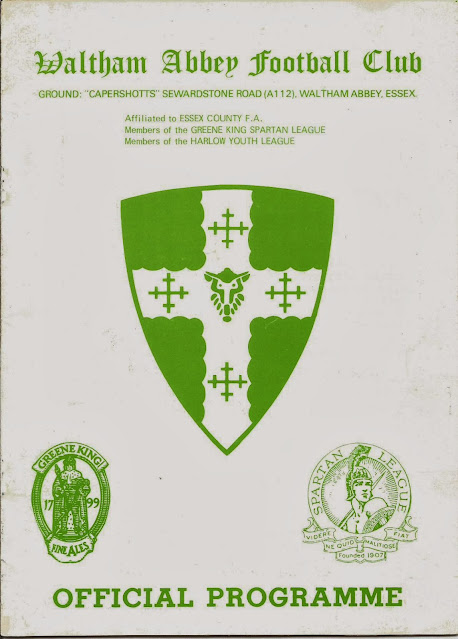