Maidenhead is a large affluent town in the Royal Borough of Windsor and Maidenhead, in Berkshire, England. It lies south of the River Thames (although at Maidenhead the river runs north-south so the town is in fact on its west bank). Maidenhead is 25.7 miles west of Charing Cross in London. Maidenhead's name refers to the riverside area where the "New wharf" or "Maiden Hythe" was built, perhaps as early as Saxon times. The area of the town centre was originally known as "South Ellington" and is recorded in the Doomsday Book as Ellington in the hundred of Beynhurst. King Charles I met his children for the last time before his execution in 1649 at the Greyhound Inn on the High Street, the site of which is now a branch of the NatWest Bank. A plaque commemorates their meeting. When the Great Western Railway came to the town, it began to expand. Muddy roads were replaced and public services were installed. The High Street began to change again and substantial Victorian red brick architecture began to appear throughout the town. Maidenhead became its own entity in 1894, being split from the civil parishes of both Bray and Cookham. Maidenhead's industries include: software, plastics, pharmaceuticals, printing, and telecommunications.


Maidenhead United Football Club was founded in 1870 and moved to their current ground at York Road the following year. The Football Association has acknowledged that it is the "oldest senior football ground continuously used by the same club". The origins of senior football in Maidenhead can be traced back to October 1870 with the formation of Maidenhead Football Club, who subsequently played their first-ever fixture in December 1870 against Windsor Home Park on a site close to the River Thames. On 16 February 1871 the club played their first game on the York Road site against Marlow. The Club were one of the original 15 entrants for the first-ever FA Cup competition in 1871–72. The following season they reached the last four before losing to Oxford University. Maidenhead reached the quarter-finals in the next two seasons, but in 1876 withdrew, returning the following season. They also entered the first-ever Berks & Bucks Cup competition in 1878 and the first FA Amateur Cup in 1893. Maidenhead F.C. were founder members of the Southern League in 1894 but competing with the likes of Watford, Brentford, Fulham and Brighton proved too demanding and eventually they dropped into the West Berkshire League, which they won, and the Berks & Bucks League, in which they finished bottom. In 1904 Maidenhead joined the Great Western Suburban League. Maidenhead Norfolkians, meanwhile, were founded in 1884 and were successful members of the South Bucks & East Berks League before also joining the West Berks League and the Berks & Bucks League. In 1904 they joined Maidenhead FC in the Great Western Suburban League. Norfolkians played at Kidwells Park which can still be seen to this day, but as a public park – it once staged a Berks & Bucks Cup Final. After the Great War the two clubs amalgamated as Maidenhead Town and adopted the famous black & white stripes. They had immediate success winning the Great Western League. In 1920 the name "United" was adopted and two years later they entered the Spartan League. They won the title three times in their nineteen-year stay. In 1936 Maidenhead reached the semi-final of the FA Amateur Cup losing 4–1 to Ilford at West Ham in front of 18,000 spectators. It was that season that the ground record attendance of 7,989 was set when Southall came to York Road in the quarter-final. In the 1929–30 season the club’s goal-scoring record for a season was set when Jack Palethorpe scored 65 goals in 39 games. He went on to play for Sheffield Wednesday and scored in the Owls FA Cup win in 1935. Following the end of the Second World War the club entered the Corinthian League. In six seasons between 1956 and 1962 the club won the title three times, were runners-up twice and also reached the third Round of the FA Amateur Cup, losing to West Auckland. They also made three appearances in the First Round Proper of the FA Cup. In 1963 United joined the Athenian League, but were unable to repeat their Corinthian success, but in 1973 were elected into the new Isthmian League second Division. They had a flirtation with promotion to the Premier Division in 1979 and 1980 under Geoff Anthony, and then again in 1985 under Brian Caterer and Colin Lippiatt. This is where they stayed until 1987 when the Club suffered relegation for the first time in its history, the black days made worse with the destruction of the main stand by an arson attack and financial problems.


This Pieman was able to visit York Road on a Tuesday evening. The journey by train from London Paddington taking just over half an hour and the subsequent walk from Maidenhead Station taking only a few minutes. The home side defeated Eastbourne United by two clear goals in this Isthmian League encounter. 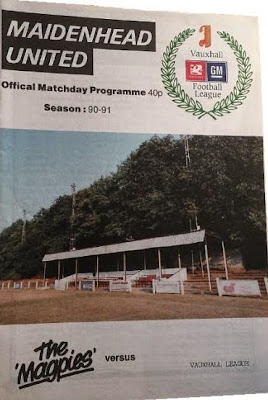