King's Lynn is a seaport and market town in the ceremonial county of Norfolk in the East of England. It is situated 97 miles north of London and 44 miles west of Norwich. The name Lynn is said to be derived from the body of water near the town: the Celtic word Lyn, means a lake; but the name is plausibly of Anglo-Saxon origin, from the word Lean, implying tenure in fee or farm. For a time it was named Len Episcopi (Bishop's Lynn) while under the jurisdiction, both temporal and spiritual, of the Bishop of Norwich; but during the reign of Henry VIII it was surrendered to the crown, and it then assumed the name of Lenne Regis, or King's Lynn. In the Doomsday Book, it is known as Lun, and Lenn; and is described as the property of the Bishop of Elmham, and the Archbishop of Canterbury. During the 14th century, King's Lynn ranked as England's most important port. It was considered as important to England during the Middle Ages as Liverpool was during the Industrial Revolution. Sea trade with Europe was dominated by the Hanseatic League of ports; the transatlantic trade and the rise of England's western ports would not begin until the 17th century. The town retains two former warehouses of the Hanseatic League; Hanse House built in 1475 and Marriott's Warehouse in use between the 15th and 17th centuries. They are the only remaining buildings of the Hanseatic League in England. During the 16th century a piped water supply was created, although many could not afford to be connected. Like all towns at that time King's Lynn suffered from outbreaks of plague: there were severe outbreaks in 1516, 1587, 1597, 1636 and 1665. But the 1665 outbreak proved to be the last. Fire was another hazard and in 1572 thatched roofs were banned to reduce the risk of fire. In 1642 came civil war between king and parliament. At first King's Lynn supported parliament, but in August 1643, after a change in government, the town changed sides. Parliament lost no time in sending an army to capture the town. King's Lynn was besieged for three weeks before it surrendered. By the late 17th century, the town had begun to decline, and it was only rescued by the late arrival of railway services in 1847. These services were mainly provided by the Great Eastern Railway – subsequently London and North Eastern Railway. Trains ran from King's Lynn to Hunstanton, Dereham and Cambridge. During World War I, Lynn was one of the first towns in Great Britain to be bombed from the air. When World War II began, it was assumed that King's Lynn would be safe from bombing, and many evacuees were sent there from London. However King's Lynn was not completely safe and suffered several air raids. In 1962 King's Lynn became an overflow town for London, and the town's population increased. New estates were built at the Woottons and Gaywood. In the 1960s the town centre was redeveloped and many old buildings were destroyed. Lynnsport, a sports centre, opened in 1982.

It is not known when King's Lynn first had a football club although there is mention of it existing in 1868. Known locally as Lynn Town, it is said they did not adopt the name King's Lynn until 1953. In 1882–83 they won the Norfolk Senior Cup and went onto win it three more times in the next seven years. In 1897 they were founder members of the Norfolk & Suffolk League and were champions four times before World War I. After the war they won four consecutive titles between 1921–22 and 1924–25. In 1935 Lynn were founder members of the Eastern Counties League. They left in 1946 to join the United Counties League, but returned to the ECL in 1948. During the 1949–50 season they set the league's record attendance of 8,387 for a local derby with Wisbech Town, and also set their own record later in the season when 12,931 saw them play Exeter City in the FA Cup. In 1953–54 they won the league and league cup, and at the end of the season stepped up to the Midland League. Four years later they joined the Southern League when it added a second division. After a transitional season in the South East Division, they qualified for a place in the Premier Division. They were relegated to Division One at the end of the 1961–62 season, but returned to the Premier Division after finishing second in 1963–64. They won four successive East Anglian Cups between 1964–65 and 1967–68, but were relegated again at the end of the 1970–71 season. In 1980 the club transferred to the Northern Premier League, winning the President's Cup in their third season in the league. In 1983 they returned to the Southern League and won the East Anglian Cup again in 1984–85. They were relegated to the Midland Division at the end of the 1986–87 season.

This Pieman visited the Walks Stadium for this FA Vase tie with Guiseley. The Yorkshire side won an entertaining match 4-1. The journey to Kings Lynn was made by train from Harlow Town changing at Cambridge. The walk from the station to the ground taking a little over 5 minutes. 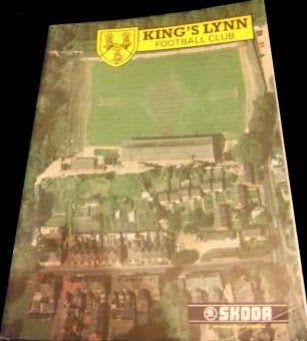 
Subsequent visit to this venue