Tooting has been settled since pre-Saxon times. The name is of Anglo-Saxon origin but the meaning is disputed. It could mean the people of Tota where Tota may have been a local Anglo-Saxon chieftain. Alternatively it could be derived from an old meaning of the verb to tout, to look out. There may have been a watchtower here on the road to London and hence the people of the look-out post. The Romans built a road, which was later named Stane Street by the English, from London (Londinium) to Chichester (Noviomagus Regnorum), and which passed through Tooting. Tooting High Street is built on this road. In Saxon times, Tooting and Streatham (then Toting-cum-Stretham) was given to the Abbey of Chertsey. Later, Suene (Sweyn), believed to be a Viking, may have been given all or part of the land. In 933, King Athelstan of England is thought to have confirmed lands including Totinge (Tooting) to Chertsey Abbey. Tooting appears in the Doomsday Book of 1086 as Totinges. Lower Tooting was held from Chertsey Abbey by Haimo the Sheriff (of Kent). As with many of South London's suburbs, Tooting developed during the late Victorian period. Some development occurred in the Edwardian era but another large spurt in growth happened during the 1920s and '30s.

In 1932, Tooting FC (founded 1887) and Mitcham Wanderers FC (founded 1912) quite literally united to become the modern club representing the two areas. Their merger had been mooted for two years previously, but it was only after it became clear that the area couldn't host two competitive teams that anything happened to advance it. Originally playing in white shirts, in 1956 the broad black and white stripes were adopted. The club won the Isthmian League twice, in 1958 and 1960. Other honours include the Surrey Senior Cup and the London Senior Cup (which, despite its grandiose name, features only low-level clubs). Perhaps the most famous FA Cup run was in 1959, when the club reached the third round; drawn at home to First Division Nottingham Forest, on a frozen pitch they went into a 2 goal lead with goals from Grainger and Murphy before Forest fought back with the aid of a Murphy own goal and a penalty. Forest won the replay 3–0 in front of a crowd of 42,362 and went on to win the trophy that year. Tooting and Mitcham also reached the 4th Round of the FA Cup and the Quarter Finals of the FA Trophy in the 1975/76 season. 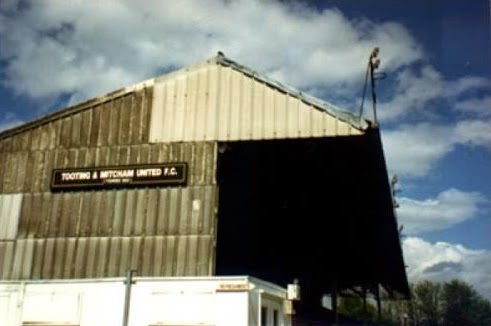 This Pieman made the journey to Sandy Lane after work in Central London travelling by train to Tooting station from where a ten minute walk enabled me to reach the ground. The match was a good contest with the home side beating Harlow Town by the odd goal in five. 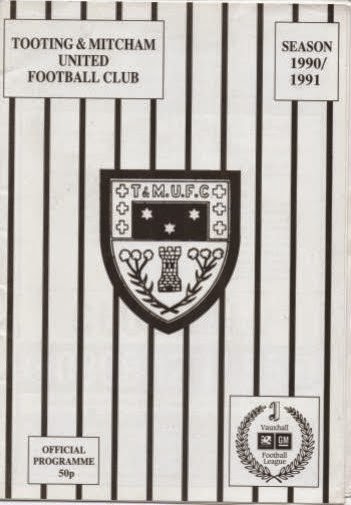