Rainham is a suburban town in east London, and part of the London Borough of Havering. Located 13.6 miles east of Charing Cross, it is surrounded by a residential area, which has grown from the historic village, to the north and a commercial area, fronting the River Thames, to the south. Rainham is recorded in the Doomsday Book of 1086 as Raineham and is thought to mean 'homestead or village of a man called Regna', formed from an Old English name and 'hām', meaning settlement. It is also possible that it follows Rainham, Kent which is thought to derive 'home of the Roegingas'. This is also of uncertain meaning, but could refer to 'the ruling people'. As part of the suburban growth of London in the 20th century, Rainham significantly expanded and increased in population, becoming part of Hornchurch Urban District in 1934, and has formed part of Greater London since 1965. The economic history of Rainham is underpinned by a shift from agriculture to industry and manufacture and is now in a period of regeneration.


This Pieman travelled to Rainham by train from London Fenchurch Street. Deri Park being around a ten minute walk from the station. The home side won this Isthmian League, Division Two North match against neighbours Tilbury by the odd goal in three. I was fortunate to be offered a lift to Tottenham Hale after the match which ensured a speedy return home. 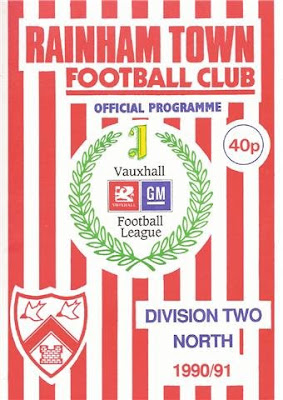