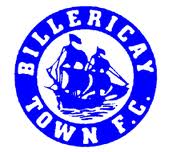 Billericay is a town and civil parish in the Basildon borough of Essex, England. It lies within the London Basin, and constitutes a commuter town 28 miles east of central London. Some of the earliest records of human occupation of Billericay are the burial mounds in Norsey Wood: evidence of occupation in the Bronze and Iron Ages. Evidence of Roman occupation has been found at a number of locations in the town and there may have been a small cavalry fort at Blunts Wall. The Saxons did not settle in the centre of Billericay. They established themselves two miles south, at Great Burstead. In the late 10th century it was known as 'Burhstede'. Billericay was not mentioned in the Doomsday Book, as it lay within Great Burstead. At this time the parish church for Billericay was at Great Burstead. In the Georgian period many excellent examples of the period's houses were built in Billericay. One of those remaining today is Burghstead Lodge in High Street, which used to house the library. The road from Billericay to Tilbury still had a reputation for "footpads" and highwaymen operating along the road, where it passed through open country. In the town, the Union Workhouse was built in 1840 to continue to implement the Poor Law. Parts of this building were later incorporated into what was St. Andrew's Hospital. The railway arrived in Billericay in 1889, being on the Great Eastern Main Line between London and Southend-on-Sea. In 1916, during the First World War, one of the giant German Zeppelin airships was shot down during an aerial battle over Billericay. During its fiery demise, it narrowly missed the High Street, crashing into a nearby field. Recent research has indicated that this may be identified with the 'ghost Zeppelin' of Tonbridge, which was allegedly seen floating over that town earlier in the day.

Billericay Town Football Club was formed in 1880. They competed in the Romford & District League from 1890 until World War I, after which they competed in the Mid-Essex League until 1947, when they entered the Southern Essex Combination League. In 1966 Billericay became founding members of the Essex Olympian League and then became founder-members of the Essex Senior League five years later. Billericay Town play their home games at New Lodge, which has a capacity of around 3,500 and seating for over 400. The ground was opened in 1970. They won the Essex Senior League three times and the league cup four times during the 1970s. Billericay also won the FA Vase twice during their time in the Essex Senior League. They were promoted to the Athenian League in 1977, winning the league cup in their first season and the championship in the following two. Due to this success the club was promoted to the Isthmian League. In 1978–79, their last season in the Athenian League, Billericay Town became the first club to win a third FA Vase; it was also notable as Dougie Young scored the first hat-trick at Wembley in a final since Geoff Hurst in 1966. Entering the Isthmian League at Division Two, they won the title in their first season and were promoted to Division One. The following season the club was promoted to the Premier Division as runners-up. During the 1980s they were relegated twice and now play in Division Two North. 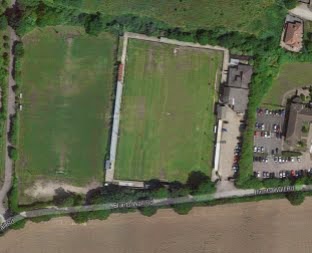 This Pieman travelled by train from London Liverpool Street to Billericay for this evening match. The walk from the station to the ground taking around ten minutes. An entertaining match saw the home side defeat visitors Saffron Walden Town 4-2. 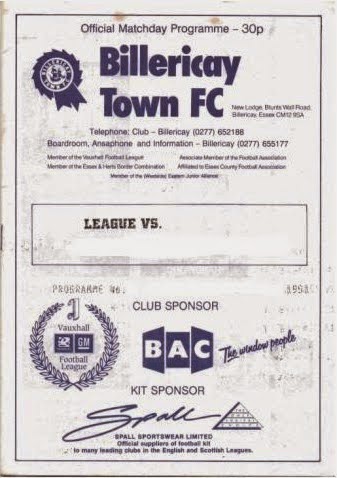