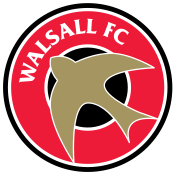 Walsall is a large industrial town in the West Midlands. It is located 8 miles north-west of the City of Birmingham and 6 miles east of the City of Wolverhampton. Walsall underwent modernisation in the 1970s with a new town centre being built at the expense of some medieval properties. In 1974, Walsall was transferred from the county of Staffordshire to form the metropolitan county of the West Midlands. Walsall is currently undergoing a new era of urban regeneration with many brownfield sites being replaced with modern houses flats and offices. The Saddlers' Centre, a modern shopping complex, was opened in the town centre in 1980. The Savoy Cinema was a landmark on Park Street for more than half a century after its opening on 3 October 1938. It was refurbished in 1973 and became the Cannon Cinema after a takeover in 1986. Noddy Holder – Lead singer of 1970s rock band, Slade was born in Caldmore in Walsall and then later moved to Beechdale. He also attended T.P. Riley Comprehensive School in Bloxwich.


In 1986 plans were announced to move Walsall FC to Birmingham, to groundshare with Birmingham City. The town rallied behind Barrie Blower, who led a campaign to save the club. Walsall FC was subsequently bought by millionaire entrepreneur and racehorse owner Terry Ramsden and with his money came high profile signings and the attention of the national media. In 1986–87, under new manager Tommy Coakley, Walsall narrowly missed the play-offs, but made considerable progress in the FA Cup as they defeated First Division Charlton Athletic and Birmingham City and took Watford to two replays in the fifth round. Walsall earned promotion through the old Division Three play-offs in 1988, beating Bristol City in a replayed final at Fellows Park, 13,007 where there to see it. 1988–89 saw the club relegated from Division Two and Ramsden's business empire collapsed alongside the Tokyo Stock Exchange. Walsall were minutes from being taken over by Japanese administrators and folded, but survived, again through the actions of Barrie Blower and local businessmen. Further relegation followed at the end of 1989–90 as Walsall were consigned to Division Four. The club moved to the Bescot Stadium in 1990, only the second new Football League ground since the 1950s. 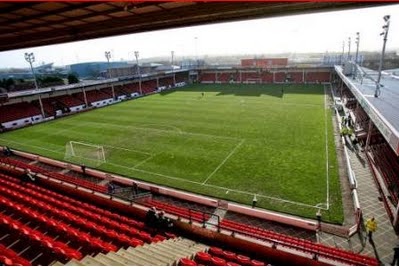 This Pieman travelled by car (the M6 is very close to the Bescot Stadium) for this Football League Division Three encounter with Maidstone United on a Wednesday evening. Very little can be said for the match but the pie and chips served in the ground was top notch. 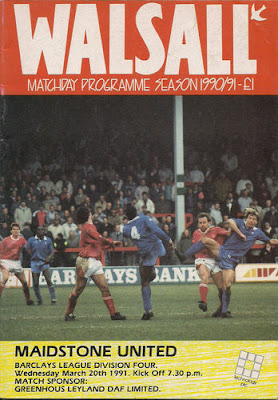 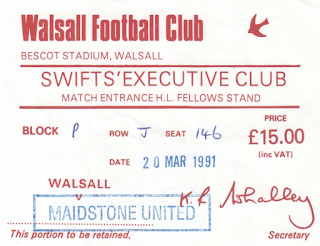