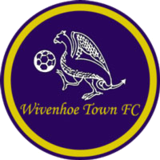 Wivenhoe is a town and civil parish in north eastern Essex, England, approximately 3 miles south east of Colchester. Historically Wivenhoe village, on the banks of the River Colne, and Wivenhoe Cross, on the higher ground to the north, were two separate settlements but with considerable development in the 19th century the two have merged. Wivenhoe is recorded in the Doomsday Book of 1086 as Wiivnhou when it formed part of the land of Robert Gernon, where there was a mill, 12 acres f meadow and pasture for 60 sheep. Wivenhoe developed as a port and until the late 19th century was effectively a port for Colchester, as large ships were unable to navigate any further up the River Colne, which widens here into its estuary. Wivenhoe had two prosperous shipyards. It became an important port for trade for Colchester and developed shipbuilding, commerce and fishing industries. The period of greatest prosperity for the town came with the arrival of the railway in 1863. In 1884 the town suffered significant damage when it lay close to the epicentre of one of the most destructive UK earthquakes of all time - the 1884 Colchester earthquake. In 1890, there was a population of about 2,000 mostly engaged in fishing for oysters and sprats and in ship and yacht building. A dry dock was built in 1889 and extended in 1904, making it one of the largest on the East Coast; it was demolished in the mid-1960s. In the 1960s, Wivenhoe Park was chosen as the location for the University of Essex. During the UK miners' strike (1984-1985), the now defunct Wivenhoe Port imported coal and became subject to picketing by miners (many from Yorkshire). This led to a very substantial police presence, some of them drafted in from other counties, and violent skirmishes as striking miners tried to prevent vehicles entering and leaving the port.


The football club was established as Wivenhoe Rangers by Frank Slaughter and students from Colchester Grammar School in 1925. They joined the Brightlingsea & District League in 1929. After finishing third in 1929–30 and second in 1931–32, they won the league without losing a match in 1932–33. They won the league again in 1936–37, together with the League Challenge Cup, the League Knockout Cup and the Amos Charity Cup, winning the final against Tollesbury 8–1 in front of a record attendance of 1,500. The league title was won once more in 1947–48, with the Knockout Cup also won again. They switched to the Colchester and East Essex League, winning the Premier Division in 1952–53 as well as the League Challenge Cup. In 1955–56 they won the league again, together with the Knockout Cup, and also reached the final of the Essex Junior Cup, losing 3–2 to Heybridge Swifts. After being relegated, the club returned to the Premier Division as Division One champions in 1959–60, but were immediately relegated again, and later dropped into Division Two. In 1968–69 they finished runners-up and returned to Division One. The following season they won the division and were promoted back to the Premier Division. After finishing runners-up to Mersea Island in 1970–71, the club were promoted to Division Two of the Essex & Suffolk Border League. They won the division in their first season, and also claimed the Division One title the following season. In 1974 the club were renamed Wivenhoe Town. In 1977–78 the club bought a carrot field on Broad Lane the outskirts of Wivenhoe for £2,500 in order to move back to the town, having most recently been playing at the University of Essex in nearby Colchester. The following season they won the Premier Division, and were promoted to the Essex Senior League. After finishing runners-up three times in seven seasons, the club were promoted to Division Two North of the Isthmian League at the end of the 1985–86 season. In 1987–88 they won the title, and were promoted to Division One, also winning the Essex Senior Trophy. In 1989–90 the club won Division One, accumulating 100 points, and were promoted to the Premier Division. This Pieman travelled by train from London Liverpool Street for this Good Friday Isthmian League encounter with Windsor & Eton. The walk from the station took around ten minutes. Former Spurs players Garry Brooke, Mark Falco and John Lacey were in the Wivenhoe Town team that shared the spoils with this 2-2 draw. 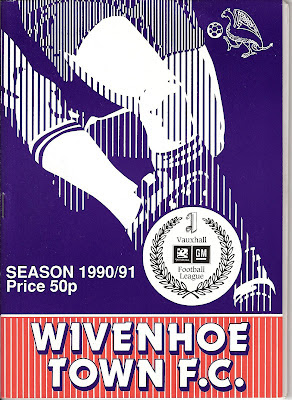