Canterbury is an historic English cathedral city in South East England. It lies on the River Stour. The Canterbury area has been inhabited since prehistoric times. In the 1st century AD, the Romans captured the settlement, and named it Durovernum Cantiacorum, meaning "stronghold of the Cantiaci by the alder grove". The Romans rebuilt the city, with new streets in a grid pattern, a theatre, a temple, a forum and public baths. In the late 3rd century, to defend against attack from barbarians, the Romans built around the city an earth bank and a wall with seven gates, which enclosed an area of 130 acres. Canterbury did not resist William the Conqueror's invasion in 1066 and William immediately ordered a wooden motte-and-bailey castle to be built by the Roman city wall. In the early 12th century, the castle was rebuilt with stone. After the murder of Archbishop Thomas Becket at the cathedral in 1170, Canterbury became one of the most notable towns in Europe, as pilgrims from all parts of Christendom came to visit his shrine. This pilgrimage provided the framework for Geoffrey Chaucer's 14th-century collection of stories, The Canterbury Tales. By 1770, the castle had fallen into disrepair, and many parts of it were demolished during the late 18th century and early 19th century. In 1787 all the gates in the city wall, except for Westgate – the city jail – were demolished as a result of a commission that found them impeding to new coach travel. The Canterbury and Whitstable Railway, the world's first passenger railway, was opened in 1830. The biggest expansion of the city occurred in the 1960s, with the arrival of the University of Kent at Canterbury and Christ Church College

Canterbury City FC was founded in 1947 and spent a long association with the Kent and Southern Football Leagues. However, archaic evidence suggests a team of the same name existed in the mid-19th century, though the modern team did not claim lineage. Originally Canterbury played in the Kent League from 1947 to 1959. In their first season they made it to the semi-finals of the Kent League Cup where they lost 2-0 away at Margate. They joined the Metropolitan League for the 1959–60 season where they finished third. This was enough to win promotion to the Southern League Division 1 where they soon consolidated. The 1960s saw some good FA Cup runs for Canterbury as they twice made it through to the 1st round proper. In 1964–65 they hosted Torquay United at home but lost 6–0 in front of a record 3,001 attendance and in 1968–69 they gave Swindon Town a tough battle before eventually going down by a narrow 1–0 scoreline. They also achieved their highest position in English football by finishing seventh in the 1965–66 Southern League Division 1 campaign. In 1971 Division 1 was renamed the Southern Division as Canterbury remained a regular name in the division. Canterbury City play their home matches at Kingsmead Stadium, which was built on top of a rubbish dump site. It opened for football on 30 August 1958 and was also used as an athletics track.

This Pieman visited the Kingsmead Stadium, travelling to Canterbury by train. The occasion was a testimonial match for Dave Linstrem. The visiting Tottenham Hotspur side won 5-1. 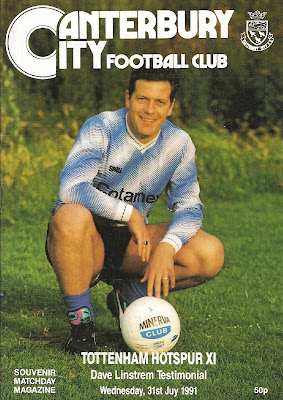