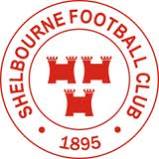 Drumcondra is a residential area and inner suburb on the Northside of Dublin, Ireland. The River Tolka and the Royal Canal flow through the area. The village of Drumcondra was the central area of the Parish of Clonturk, and the two names were used equally for the religious and civil parishes, but the new suburban district of Drumcondra now also encompasses the old Parish of St.Mary. The Cat and Cage Pub on the Drumcondra Road was the site of an old postal stop and the point at which rebels, during the 1798 rebellion, seized a postal cart in order to signal to others in north County Dublin to revolt. The Cat and Cage is located at the corner of Church Avenue.

Shelbourne Football Club was formed in 1885 in the Ringsend area of Dublin by a group of men led by Mr. James Rowan. The club took its name from the nearby Shelbourne Road. In 1904 the club joined the Irish Football League, which was then an all Ireland competition, before becoming founding members of the League of Ireland in 1921. In 1989 Shelbourne acquired the lease on Tolka Park from Dublin Corporation. Before moving to Drumcondra Shels had most recently been based in Harold's Cross Stadium, earlier they had been housed in Shelbourne Park, Irishtown Stadium and Dalymount Park. Shelbourne had played home games regularly in Tolka during the fifties, sixties, seventies, and early eighties. The club colours are primarily red and white, with home jerseys being predominantly red. 'Shels' is the club's most common nickname, an abbreviation of Shelbourne.

This Pieman visited Tolka Park for this pre-season friendly match and was able to visit the previously mentioned Cat and Cage public house for liquid refreshment during his stay. Tottenham Hotspur won the match 3-1 on a gloriously sunny evening. 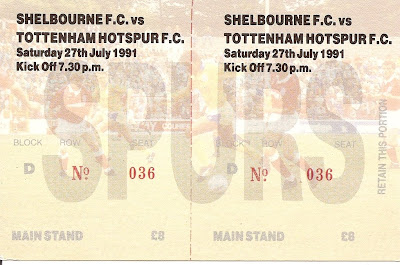