Accrington is a town in Lancashire, within the borough of Hyndburn. It lies about 4 miles (6 km) east of Blackburn, 6 miles (10 km) west of Burnley, 20 miles (32 km) north of Manchester city centre and is situated on the mostly culverted River Hyndburn. The town is a former centre of the cotton and textile machinery industries. The town is famed for manufacturing the hardest and densest building bricks in the world, "The Accrington NORI" (iron), which were used in the construction of the Empire State Building and for the foundations of Blackpool Tower; famous for its football team and for having Europe's largest collection of Tiffany Glass. 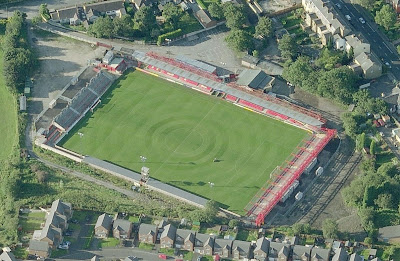 Until around 1830 visitors considered Accrington to be just a "considerable village "The Industrial Revolution, however, resulted in large changes and Accrington’s location on the confluence of a number of streams made it attractive to industry and a number of mills were built in the town in the mid-eighteenth century. Further industrialisation then followed in the late eighteenth century and local landowners began building mansions in the area on the outskirts of the settlement where their mills were located while their employees lived in overcrowded unsanitary conditions in the centre.


Accrington had been without a football team following the collapse of the original Accrington Stanley in 1966. The original team had been formed in 1891 and played in The Football League from 1921 to 1961; it had spent its final four seasons in the Lancashire Combination. At a meeting in the town library in October 1968 the revival was initiated by Stanley Wotherington and in August 1970 the new club played at a new ground, the Crown Ground. Since their formation, Stanley has climbed the non-League pyramid to reach The Football League. This Pieman was working nearby and took the opportunity to visit the Crown Ground on the occasion of this pre-season match with neighbours Blackburn Rovers.  A low-key affair saw Rovers win by the only goal.