Collier Row is an area in north east London in the London Borough of Havering. It is a suburban development north of Romford, located 14 miles north east of Charing Cross. The area is based on a large housing estate built during the 1930s as part of the inter-war London housing expansion, with shopping facilities around a central crossroads. Its name originates from charcoal burners who used to occupy the area. Remains of Roman settlement have been uncovered in the area. Collier Row was formerly part of the county of Essex until the formation of Greater London in 1965.

Collier Row FC was formed in 1929 as Hamden United. In the 1966-67 season the club were founder members of the Essex Olympian League. The club originally played at nearby White Hart Lane before securing a plot of land in the adjoining Collier Row Road, which would become known as Sungate. Substantial ground development in the 1970’s saw a large clubhouse opened and a small covered stand being erected, having rescued padded seating which was being disposed of by Butlin’s in Clacton. A goat was kept to maintain the pitch surface, but after a butting incident, a more conventional grass cutting method was adopted. In 1973 they changed their name to Collier Row Motor Gear before adopting their current name in the early 1980’s and at the same time joining the London Spartan League; becoming league champions in 1983-84 and 1985-86 and runner-up in the middle 1984-85 season. Further promotion to the Isthmian League Division Two North in 1986-87 was followed by a short lived promotion to Division One as the club were relegated back to Division Two North in 1989.

This Pieman visited Sungate for this FA Cup, 1st Qualifying Round replay. The journey by train to Romford was followed by a bus journey to Collier Row. Visitors Purfleet progressed to the next round thanks to the only goal of the match. 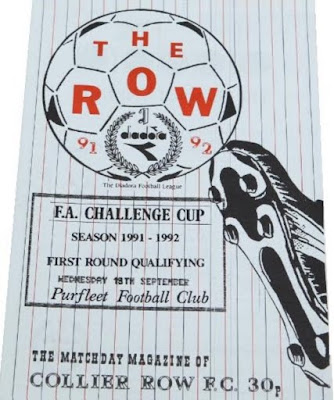