Petersfield is a market town and civil parish in the East Hampshire district of Hampshire, England. It is 17 miles north of Portsmouth. The town was founded during the 12th century by William Fitz Robert, 2nd Earl of Gloucester, later chartered by his widow, Hawise de Beaumont and confirmed by charter in 1198 from "John, Count of Mortain" (later to be King John). In 1415 King Henry V granted the burgesses of Petersfield freedom from toll, stallage, picage, pannage, murage, and pontage throughout the realm of England. All charters are preserved in the archive files at Petersfield Town Council. The town grew in prosperity due to its position on frequently travelled routes, local sheep farming, and cottage industries including leather and cloth. There were weekly markets in the town square for sheep, horse and cattle trading, and two annual fairs, in June (on the feast of St Peter and St Paul) and November (on the feast of St Andrew). An autumn fair, which began in the early 19th century, was held in October on The Heath, called "The Taro Fair". The town's market square has an 18th century statue of King William III (of Orange) by Henry Cheere. The king is mounted and the statue is on an engraved plinth. It is one of only five statues of William in the United Kingdom outside Northern Ireland (the others being in Glasgow, Brixham, Hull and Bristol) and, as such, attracts bands of marching Orangemen in mid-July to commemorate William's victory at the Battle of the Boyne.

Petersfield United FC was founded in 1889, but little is documented about their early history. In 1981-82 they were Hampshire League Division Two Champions (on goal difference) and were promoted to Division One. In 1984-85 they joined Isthmian League Division Two South, where they played until being placed in Division Three following re-organisation for the 1991-92 season. 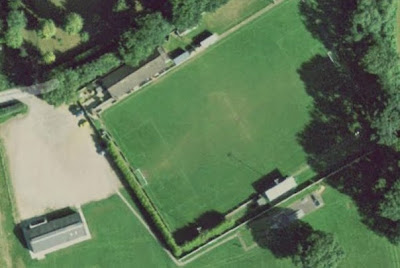 This Pieman visited Love Lane for this midweek fixture. The journey from London Waterloo to Petersfield taking just over an hour. The walk from the station to the ground took around ten minutes. Visitors Flackwell Heath were convincing winners on the night. 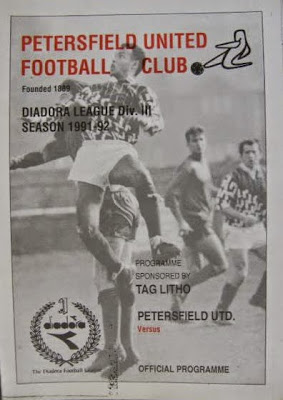