Chertsey is a town in the Runnymede borough of Surrey, England on the River Thames and a tributary river, the River Bourne, in the Greater London Urban Area, bordered by junction 11 of the M25 London orbital motorway, the town of Addlestone and by villages and hamlets. Chertsey is one of the oldest towns in England that grew to all sides but the north around Chertsey Abbey, founded in 666 A.D by Eorcenwald, Bishop of London. Today the history of the abbey is reflected in local place names and the surviving former fishponds that fill with water after heavy rain. The nearby Hardwick Court Farm, now much reduced in size and cut off from the town by the M25, retains the abbey's impressive 15th century tithe barn. Vince Clarke of pop bands Yazoo, Depeche Mode and Erasure lived in Chertsey and recorded much of the Erasure material in the studio adjacent to his home. 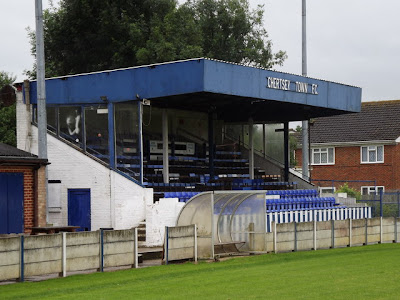 The official founding of Chertsey Town FC took place in 1890 when matches were played in the West Surrey League. An invitation to become founder members of the Surrey Senior League was not taken up in 1923 but membership was later assumed, on attaining senior status in 1946. The club played at various locations over the years (Willow Walk, Free Prae Road, Staines Lane and Chilsey Green) before settling at the present location Alwyns Lane in 1929.


This Pieman travelled by train from London Waterloo to Chertsey. Alwyns Lane is only a short walk from the railway station. An under strength Enfield side were still far too good for their opponents on this particular evening, winning 4-1 in an Isthmian League Cup tie. 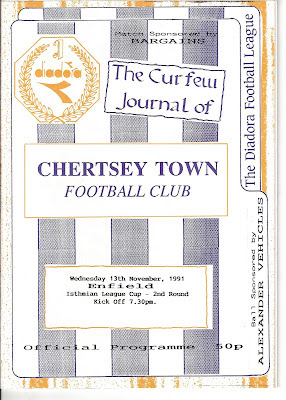