Witham is a town in the county of Essex. It is part of the District of Braintree and is twinned with the town of Waldbröl, Germany. Witham stands between the larger towns of Chelmsford (8 miles to the south-west) and Colchester (13 miles to the north-east). The River Brain runs through the town and joins the River Blackwater shortly outside it. Excavations by Essex County Council field archaeological unit at the recent Maltings Lane development discovered evidence of Neolithic occupation of Witham including human remains and several trackways across ancient marsh. Excavations of the Witham Lodge (Ivy Chimneys) area of the town unveiled remains of a Roman temple in the 1970s as well as a pottery kiln. This would have been alongside the main Roman road from Colchester to London and used as a stop over point. A one time famous resident of the town is the author Dorothy L. Sayers whose statue stands opposite the town's library. The library stands on the site of the old Whitehall cinema, which closed in the late 1970s. Witham is situated on the A12 trunk road between Chelmsford and Colchester. Originally the A12 ran in a straight line through the middle of the town; however for some decades there has been a by-pass completely avoiding the town.

Clubs named Witham Town have been in existence since the mid 19th century with the original club being disbanded in 1914 due to World War I. The club reformed in 1918 and won the Braintree and District League championship in 1920–21 and 1924–25 as well as the Essex Shield Division Two in 1925–26. They joined the Chelmsford and Mid Essex League (later the Mid-Essex League) and were Division Three champions in 1935–36. The club was disbanded again due to the outbreak of World War II. The club was reformed again after the war and rejoined the Mid-Essex League. They won Division Three in 1947–48 and Division Two the following season. The club won the Premier Division cup in 1949–50, but following a dispute with the league over a match played in snowy conditions, the club switched to the South Essex League in 1952. They won the league in 1955–56, before joining the Essex & Suffolk Border League (ESBL) in 1958. They won the ESBL in 1964–65 and 1970–71, as well as the League Cup in 1965–66. In 1971 the Witham Town FC became a founder member of the Essex Senior League, and was its inaugural champions. The club won the league again in 1985–86 and after finishing as runners-up the following season, was promoted to Division Two North of the Isthmian League in 1987. 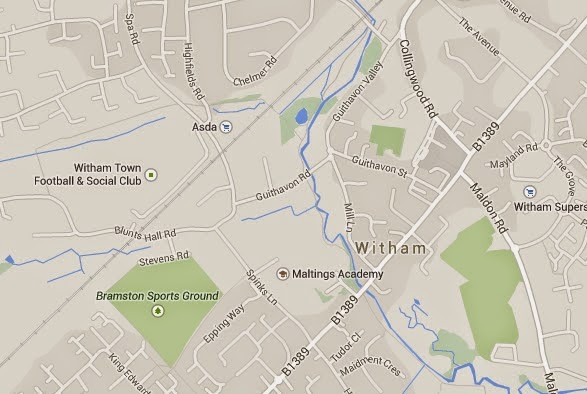 This Pieman ventured to Witham one midweek evening after work. The journey from London Liverpool Street taking around 40 minutes. The walk from the railway station to Spa Road took a further 20 minutes. The home side convincingly beat visitors Southall 4-0.