Egham is a town in the Runnymede borough of Surrey, in the south-east of England. It is part of the London commuter belt and Greater London Urban Area and has its own railway station. It adjoins, narrowly, junction 13 of the M25 motorway and is centred 19 miles (31 km) west-south-west of London. Egham predates 666 AD when Chertsey Abbey was founded with many square miles of land, which included that of Ecga's Ham, one of the very oldest surviving charters (detailed records) of the country. Egham appears in Doomsday Book of 1086 as Egeham. The manor of Egham, which includes Runnymede belonged formerly, and in 1215, to Chertsey Abbey, and after the dissolution (around 1540) became the property of the Crown, though granted to various tenants (holders) at different times. Magna Carta was sealed at nearby Runnymede in 1215, and is commemorated by a memorial, built in 1957 by the American Bar Association, at the foot of Cooper's Hill. A Sculpture by artist David Parfitt portraying King John and Baron Fitzwalter in the act of sealing Magna Carta is also in Church Road in the centre of town. Another memorial at the top of the hill in nearby Englefield Green, the Air Forces Memorial, commemorates all Commonwealth air force personnel killed in World War II. During World War II, American author Theodor Seuss Geisel, better known as Dr. Seuss was briefly stationed in Egham. He did not settle well in the town, despite the efforts of his RAF host Flight Sergeant Sam Beckinsale to draw the local amenities to his attention. When it was pointed out how green the area was, due in part to its proximity to Windsor Great Park he retorted "I do not like green Egham". Geisel later cited this as the inspiration for his 1960 best-selling book Green Eggs and Ham and the often-repeated line in the book "I do not like them Sam I Am. I do not like green eggs and ham".

Egham Town F.C's forerunners were a team called Runnymede Rovers who were established in 1877 and played in red and white - colours the present club have now adopted as their own. Rovers were reformed as Egham FC in 1905 and were founder members of the Surrey Senior League, claiming the inaugural Championship. The club had an unsuccessful six-year spell in the Spartan League between 1927 and 1933 before returning to the Surrey Senior League, in which they played until disbanding upon the outbreak of World War II. Unlike many clubs, Egham FC did not reform at the end of the War and it was not until a public meeting at the town's Literary Institute on December 9, 1963 that the present club came into being. The local council offered the use of part of a recreation ground for the new club to play on and this remains the club's home at Tempest Road. Having played in the Parthenon League in 1964-65 season, Town returned to the Surrey Senior League in 1965, and then moved back into the Spartan League, claiming the title in 1971-72. They were then elected into the Athenian League and captured the Second Division Championship at the first attempt in 1974-75 and finishing as First Division runners-up the following season. When the Isthmian League expanded in 1977, the Sarnies were duly elected but after finishing 6th in their first season success always eluded them. They have reached the fourth round of the FA Vase once in their history - the 1984-85 season. They narrowly missed promotion from the final season of the regionalised Division Two in 1990-91, when what was Divisions Two North and South was reorganised for the following season as Two and Three. Egham finished third in Division Two South with a tally of 87 points and 100 goals - both would have been good enough in almost any other season to secure one of the two promotion spots. In that season, they also had the best ever run in the FA Cup, reaching the 4th Qualifying Round before losing at Telford United. 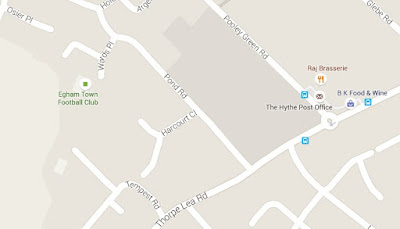 This Pieman visited Runnymede Stadium on a Tuesday evening, travelling by train from London Waterloo to Egham Station. The walk from the station taking around twenty minutes. A thrilling match saw the home side defeat Ruislip Manor by the odd goal in five. 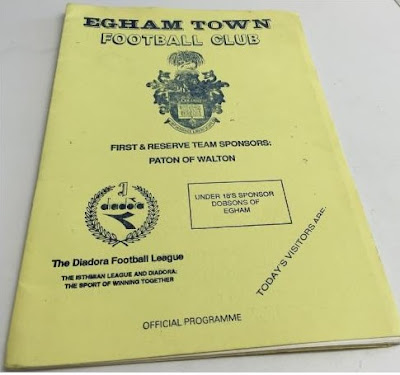