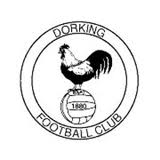 Dorking is a long-established market and later railway town in the valley of the Pipp Brook between the North Downs and the Greensand Ridge approximately 21 miles (34 km) from the centre of London, in Surrey. It is equidistant between two high points of the hill ranges, Box Hill and Leith Hill. Dorking began to become more than an agricultural village as a small staging post on Stane Street, the Roman road between London and Chichester on the English Channel. Dorking appears in Doomsday Book of 1086 as the Manor of Dorchinges. It was held by William the Conqueror. Dorking is today more of a commuter settlement than ever before and has three railway stations. In 1911 it was economically described as "almost entirely residential and agricultural, with some lime works on the chalk, though not so extensive as those in neighbouring parishes, a little brick-making, water-mills (corn) at Pixham Mill, and timber and saw-mills." Poultry remains reared by some semi-rural inhabitants of the town – Dorking chickens with an extra claw are a major breed. Sand of fine texture and often in veins of pink, for mortar and glassmaking was for a time dug, particularly in the 19th century, and some extensive caverns, the Dorking Caves were excavated for this purpose under southern parts of the town centre. 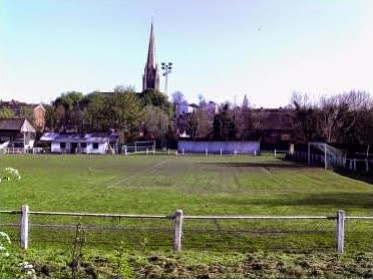 Dorking F.C was founder members of the Surrey County Senior League in 1922, and moved in 1956 to its current ground in Meadowbank Park, having previously played at a ground in Pixham Lane. The club joined the Corinthian League in 1956 and then the Athenian League in 1963. The club merged with Guildford City of the Southern League in 1974 to form Guildford & Dorking United, with Meadowbank as the home ground. However, after just two seasons, the club collapsed in mid-season, with another club being formed called Dorking Town in 1977 to complete its predecessor's remaining games before joining the Surrey Senior League in 1977–78. In 1983, by then playing in the Isthmian League, the club reverted to the name to Dorking F.C. In 1989-90 season Dorking reached the final of the Surrey Senior Cup, one of the oldest cup competitions with the first final contested in 1882-83. This was an achievement the club had only once previously managed in 1885-86 season some 104 years previously. Unfortunately they lost both finals.

This Pieman visited Dorking for the 3-3 draw with Molesey Having travelled from London Waterloo to Dorking station (around a 15 minute walk to the ground). 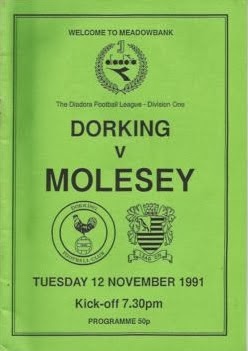