Windsor is a town and un-parished area in the Royal Borough of Windsor and Maidenhead in Berkshire, England. It is widely known as the site of Windsor Castle, one of the official residences of the British Royal Family. It is situated 21 miles west of Charing Cross, London. It is immediately south of the River Thames, which forms its boundary with Eton. The village of Old Windsor, just over 2 miles to the south, predates what is now called Windsor by around 300 years; in the past Windsor was formally referred to as New Windsor to distinguish the two. The early history of the site is unknown, although the site may have been settled many years before the medieval castle was built as there is ample evidence of Anglo Saxon settlement in the area. Windsor is first mentioned in the Anglo-Saxon Chronicle. The name originates from old English Windles-ore, or 'winch by the riverside', a royal settlement. Windsor Castle was originally built by William the Conqueror in the decade after the Norman conquest of 1066, a timber motte and bailey structure in the manor of Clewer. Some time after 1086, probably in the reign of King Henry I, the royal household moved upstream to the recently built castle. At about 1170, the present upper ward of the castle was rebuilt in stone. Windsor Bridge is the earliest bridge on the Thames between Staines and Reading, having been built when bridge building was not common. It played an important part in the national road system, linking London with Reading and Winchester, but also by diverting traffic into the new town, underpinned its success. 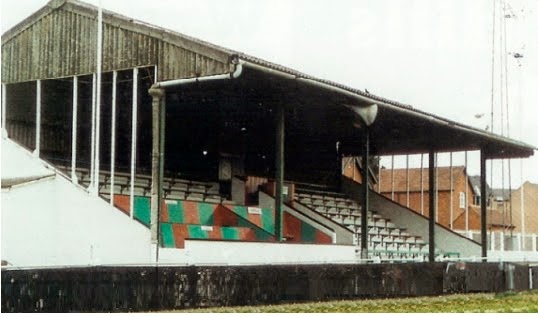 Windsor & Eton F.C. was formed on 18 August 1892 by a merger of Windsor Phoenix and Windsor St. Albans. They began in the Southern Alliance (which included teams like Tottenham), and in 1893 they merged with Windsor Victoria and entered the first FA Amateur Cup. A decline in fortunes saw them withdraw from the Berks & Bucks Senior League in 1901 before a ball had been kicked. In 1902 Windsor & Eton Temperance F.C. was the subject of a take-over, with the name being shortened to the title now used. Prince Christian was connected with the club in this era, and patrons of the club included Kings George V, George VI, and the Duke of Edinburgh, hence the club's nickname of "The Royalists". Over the years the club has competed in the Southern League (1895–96), West Berks League (1903–04), Great Western Suburban League (1904–22), Athenian League (1922–29), Spartan League (1929–39), Great Western Combination (1939–45), Corinthian League (1945–50), Metropolitan League (1950–60), Delphian League (1960–63), then the Athenian League again (1963–81), until joining the Isthmian League in 1981. This season (1991/92) is Windsor’s centenary year.

This Pieman travelled to Windsor & Eton Riverside station from London Waterloo. The walk from there to Stag Meadow took around 20 minutes. An entertaining encounter saw Grays Athletic emerge as winners by the odd goal in three. 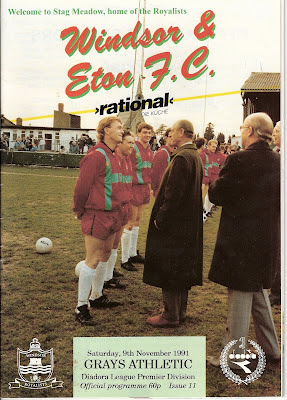