Eastbourne's earliest claim as a seaside resort came about following a summer holiday visit by four of King George III's children in 1780 (Princes Edward and Octavius, and Princesses Elizabeth and Sophia). Eastbourne has historically been a popular retirement destination. The seafront and the iconic cliff at Beachy Head has been used for many scenes in feature films, and the local council has set up a film liaison unit to encourage and facilitate the shooting of film sequences in and around the town The South Downs dominate Eastbourne and can be seen from most of the town. These were originally chalk deposits laid down under the sea during the Upper Cretaceous period, and were later lifted by the same tectonic plate movements that formed the European Alps, during the middle Tertiary period. The chalk can be clearly seen along the eroded coastline to the West of the town, in the area known as Beachy Head and the Seven Sisters, where continuous erosion keeps the cliff edge vertical and white. The chalk contains many fossils such as ammonites and nautilus. The town area is built on geologically recent alluvial drift, the result of the silting up of a bay. This changes to Weald clay around the Langney estate. 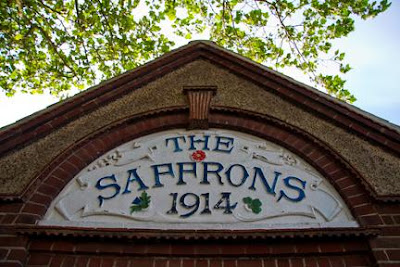 Eastbourne Town is the oldest senior football club in Sussex having been founded in 1881 as Devonshire Park, being named after its first home ground – A venue now known for staging one of the premier pre-Wimbledon tennis tournaments. After five years of playing at the Park, the club moved to the newly opened “Saffrons Field” colourfully named after the variety of crocus which had originally been cultivated on the site for use in the preparation of medicines. In the immediate post-war years the Saffron’s attendances averaged 3,000 with the ground record of 7,378 being set when Southern League side Hastings United visited in an FA Cup tie on 10th October, 1953. 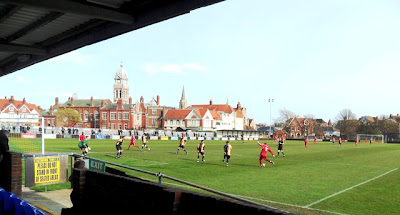 This Pieman travelled to Eastbourne by train from London Victoria. From Eastbourne Station the walk to the ground took less than ten minutes. The spoils in this match were shared with visitors Arundel FC. Once again I was impressed with the standard of football on offer in the Sussex County League. 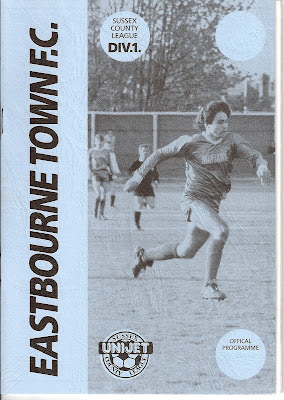