Sittingbourne is an industrial town about eight miles east of Gillingham in England, beside the Roman Watling Street off a creek in the Swale, a channel separating the Isle of Sheppey from mainland Kent. Sittingbourne owes its name to a modernised version of an observation on its location. The town's name came from the fact that there is a small stream or "bourne" running underground in part of the town. There is evidence of settlement in the area before 2000 BC, with farming and trading Celtic tribes living inland to avoid attack, yet close enough to access the sea at Milton Creek. In AD 43 the Romans invaded Kent, and to make access quicker between London and Dover, built Watling Street, which passed straight through Sittingbourne. As a point where sea access met road access, the port of Milton Regis became the Roman administrative centre for the area, with some 20 villas so far discovered, but Sittingbourne remained a minor hamlet throughout Roman times. There was no entry for Sittingbourne in Doomsday book in 1086, merely a note attached to Milton with a population of 309. However, after the murder of the Archbishop of Canterbury, Thomas Becket in 1170, pilgrims began to travel to Canterbury Cathedral and Sittingbourne became a useful hostelry for many travellers. Sittingbourne is mentioned as a stopping point in The Canterbury Tales. From 1853, after the agreement to connect Strood to Canterbury via the East Kent Railway of the London, Chatham and Dover Railway, Sittingbourne has had a railway station. Today the three platform station is served by both the Chatham Main Line and the Sheerness Line, and is located 44 miles 1260 yards from London Victoria according to the mileage sign on the footbridge. The area around Sittingbourne was subject to constant air raids by Zeppelins and aeroplanes during the First World War. The Germans used the town as a reference point for bearings on the way to London. About 100 air raid warnings were sounded in Sittingbourne during the First World War and anti-aircraft batteries were strengthened in 1917. The last big raid to pass over the town on Whit Sunday (19 May 1918), carried out by a number of Gothas, eliciting perhaps the most ferocious barrage from the ground defences the town had ever seen.

Although an earlier Sittingbourne United club had been playing since as early as 1881, Sittingbourne F.C. traces its lineage to 1886 when the club was reorganised under the new name. The club moved to a field behind the Bull pub in 1892, where they were to remain for nearly 100 years. Senior status was acquired in 1893, and the following year the club joined the first incarnation of the Kent League, before withdrawing to enter the South Eastern League in 1905. After World War I the club rejoined the Kent League, where they played until 1927 when they joined the Southern League. In 1930 they left this league and it is unclear where they played next. After World War II the Brickies rejoined the Kent League once again, where they were champions in 1957–58 and 1958–59. After the second title win they rejoined the Southern League, but after a promising start their performances declined and in 1966–67, after finishing bottom, they dropped out to join the Kent Premier League which had changed its name from the Thames & Medway Combination. This lasted for one season and the league folded. In 1968 a new Kent league was formed which the club joined. During season 1961-62 Accrington Stanley left the football league. This created a vacancy and 25 clubs applied to join, of which Sittingbourne were one. They did not obtain any votes and Oxford United were elected with 39 votes. Sittingbourne were Kent League champions in 1975–76, 1983–84 and 1990–91, the third title win earning them a place back in the Southern League. Sittingbourne FC played at the Bull Ground in the town centre until 1990 when they sold the site for £4.5 million and built a new state of the art stadium on the outskirts of the town named Central Park Stadium. However, overspending on the new ground caused the club financial difficulties and they were forced to sell the ground to the local council and lease it back. 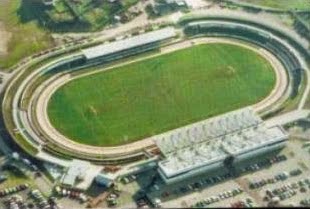 This Pieman was able to visit Central Park for this midweek friendly match against Tottenham Hotspur which drew a crowd of around 5000 to the new stadium. The young Spurs side winning by the only goal. The journey from London Victoria to Sittingbourne station was followed by a 25 minute walk to the ground. 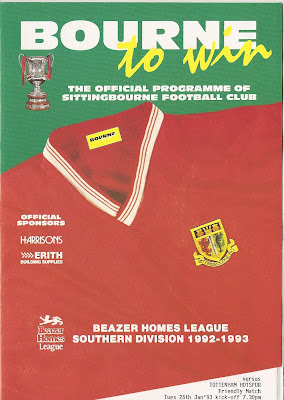