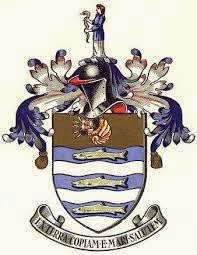 Worthing is a large seaside town in West Sussex, in the historic county of Sussex. It is situated at the foot of the South Downs, 10 miles west of Brighton, and 18 miles east of Chichester. The area around Worthing has been populated for at least 6,000 years and contains Britain's greatest concentration of Stone Age flint mines, which are some of the earliest mines in Europe. Lying within the borough, the Iron Age hill fort of Cissbury Ring is one of Britain's largest. Older local people sometimes claim that the name of Worthing is derived from a natural annual phenomenon. Seaweed beds off nearby Bognor Regis are ripped up by summer storms and prevailing Atlantic currents deposit it on the beach. A rich source of nitrates, it makes good fertiliser. The decaying weed was sought by farmers from the surrounding area. Thus the town would have become known as Wort (weed) -inge (people). The borough's coat of arms includes three silver mackerel, a Horn of Plenty overflowing with corn and fruit on a cloth of gold, and the figure of a woman, considered likely to be Hygieia, the ancient Greek goddess of health, holding a snake. The images represent the health given from the seas, the fullness and riches gained from the earth and the power of healing.

Worthing FC was formed as Worthing Association Football Club (a name that lasted until 1899) in February 1886 and played friendlies and Sussex Senior Cup ties for the first few years of their existence. In 1896 the club became founding members of the West Sussex Football League, joining the Senior Division. During their time in the West Sussex League they were league champions on seven occasions. In May 1900 the club absorbed local rivals Worthing Athletic and a year later moved to its current home, then known as the Sports Ground, now as Woodside Road. In 1905 another rival team, Worthing Rovers, was also absorbed. The club's intriguing nickname of "The Rebels" dates from when it resigned from the West Sussex League over a rule change, prior to becoming a founder member of the Sussex County League in 1920. Previously Worthing had been known as "The Mackerel Men" a reference to the fish on the club crest. In 1920 Worthing became founder members of the Sussex County League, where they won eight league titles, in fact in the twenty seasons prior to World War II they only finished outside the top four on two occasions. In 1948–49 Worthing joined the Corinthian League but met with little success. In 1963 the Corinthian League disbanded and most of its clubs joined the newly created Athenian League Division One, where Worthing won promotion at the first attempt, although after three seasons in the Premier Division, two successive relegations saw them drop to Division Two. After managing a return to the top division, Worthing joined the Isthmian League in 1977, initially in Division Two, but by 1983 they had reached the Premier Division under manager Barry Lloyd and in fact finished as runners-up in 1983–84 and 1984–85. After Lloyd's departure to Brighton & Hove Albion, however, the club soon slipped back down to Division Two, finishing bottom of Division One in the 1990–91 season with only 10 points and having conceded 157 goals. Former Northern Ireland international, Tottenham Hotspur and Brighton & Hove Albion player Gerry Armstrong was appointed manager in 1991.

This Pieman travelled by train from London Victoria direct to Worthing. The walk from the station only taking around 5 minutes. The home side were in good form on the night, beating visitors Hungerford Town 5-1. 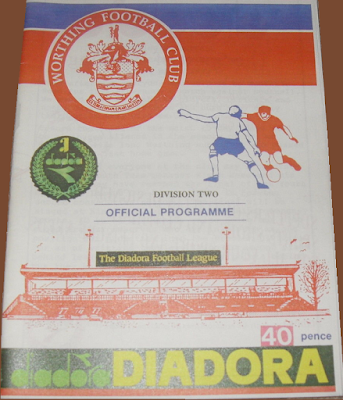