Hartley is a village and civil parish in the Sevenoaks district of Kent, England. It is located around 4.5 miles southwest of Gravesend and just south of Longfield in the neighbouring borough of Dartford. It is recorded as Erelei in the Doomsday Book of 1086, with a population of 15 families and 3 slaves. The name Hartley means "place in the wood where the deer are". The parish church of All Saints dates from the early 12th century, although it probably replaced an earlier Anglo-Saxon building. On 28 January 1554, during Wyatt's Rebellion against Queen Mary, a rebel force of about 500 men led by Henry Isley clashed with a similar-sized loyal force led by Lord Abergavenny and Sir Robert Southwell, at Wrotham Hill. After a running battle over about four miles, the rebels made their last stand at Hartley Wood, where they were defeated. By 1872, there were 47 houses in Hartley with a population of 244. Some local farms specialised in hop growing. A National School was built in the village in 1841which was rebuilt in 1960 on a new site. The opening nearby of Longfield railway station in 1872 began the evolution of the village from an agricultural to a commuter community. Just before World War I, two agricultural estates were purchased by a property developer and sold off in small plots for new houses and bungalows. Major housing developments at New Ash Green in the 1960s and Wellfield in the 1970s continued the trend.

Corinthian FC was founded in 1972 by Ron Billings, mainly to give his sons a club to play for, but also to provide football in a safe environment, whilst teaching the players the principles that he believed to be important in sport. They play at the Gay Dawn Farm sports complex and their motto is simply "pro omnium beneficio"- for the benefit of all, but on the pitch the principles were simple; "Hard, but fair". Losing wasn’t considered before the game, but if the result went against them then the team was taught to take it graciously. For the first ten years of the club's existence they welcomed such teams as Tottenham Hotspur, Charlton Athletic and Norwich City amongst other league teams as well as county and district representative sides as opposition. During the 1980s with the arrival of an experienced football manager, Tony Sitford, they progressed from youth football into competitive men’s football playing in the Southern League, at the time a level 7 league in the English football league system. This level of football by a totally amateur club made them unique, but caused problems in the long run in attracting new players. In their first season in the league they finished a creditable fifth, but subsequent seasons saw them slide down the table until they finished bottom and were relegated to the Kent League in 1991.

This Pieman took the train from London Victoria to Longfield station. From there it is around a twenty five minute walk to the ground. I was spared the walk on the way to the ground as a group of Faversham Town fans flagged down a friend in a truck - one more passenger was accommodated. However, walking back along the unlit lanes with little by way of footpaths, after the match was not my greatest experience. A decent match was won by the visitors by the odd goal in three. 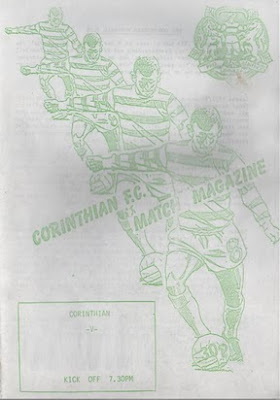